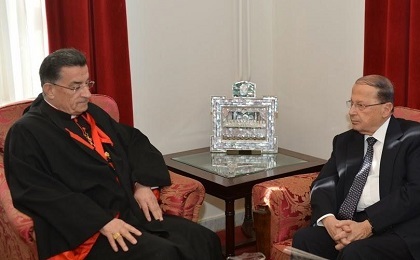 A meeting was held recently between Free Patriotic Movement leader MP Michel Aoun and Maronite Patriarch Beshara al-Rahi in Bkirki in an attempt to end the rift among them, As Safir newspaper reported on Wednesday.

According to the daily, al-Rahi held a dinner banquet on Monday night in the presence of 25 bishops and attended by Aoun.

The daily reported that Bishop Samir Mazloum paved way for the two officials to end the rift and meet at the Patriarchate after a phone conversation held between Aoun and al-Rahi last week.

Al-Rahi clarified to Aoun his statement that he doesn't want the FPM chief or Lebanese Forces leader Samir Geagea to reach the Presidential Palace.

“If your (Aoun) and Geagea's candidacy led the country to vacuum... We should seek the election of a third figure,” al-Rahi explained to Aoun.

In April, al-Rahi has ruled out the election of a president from either the March 8 or 14 alliance, saying the head of state should be consensual and capable of bringing the bickering parties closer.

The patriarch reiterated that the seat of the Maronite church in Bkirki does not support any candidate.

The newspaper said that the FPM chief stressed to gatherers at al-Rahi's banquet that the Christians, specifically the Maronites, have the right to be represented by a strong and consensual president.

Sources close to the LF denied in comments to As Safir that Geagea rejected to attend the dinner banquet despite al-Rahi's invitation, pointing out that “the circumstances that prevented him from attending the last Maronite meeting are ongoing.”

“No agreement was held on such a meeting,” the sources said.

Over the past two months the parliament convened five times to try to elect a successor to Suleiman but failed during the last five sessions due to a lack of quorum.

The killer of Christians and the man who bombed hundreds of Christians was never a general. He was a fake doctor who never finished school and who insists he's the most popular Christian figure (with 5 MPs, lol).

Ignorant,54 Mps and you don't dare to attend the session

yes bring it then :)

and what you're saying is that everyone who was there just followed the order of the LF guy who infiltrated them and just went along with the aggression. If that doesnt say sheep, i dont know what does

we will never accept what is happening to Iraqi Christians to happen in Lebanon, solution is a strong Christian president

He went with aounists?? are them babies who do not know what they r doing???

Aoun gives the same story, "Lebanon needs a strong and consensual president" and until everyone agrees to go to parliament to vote for him, then he will boycott.

Patriarch should just excommunicate him from the Maronite Church and end everyone's misery with this guy.