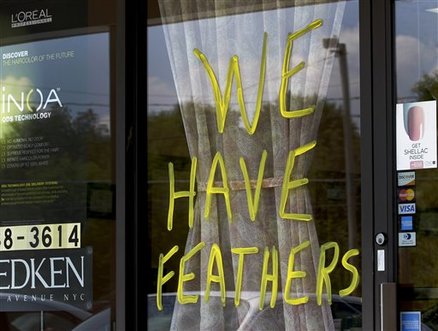 The fashion flock seems to have developed a fancy for feathers: They're decorating cocktail dresses and bohemian jewelry, and being braided into hair.

They're statements of femininity and luxury — without being too frilly, experts say.

"I think feathers are the ultimate in flirtatiousness," says designer Peter Som. "There's a sense of movement, and feathers take color really well."

Guess that means the sky is the limit.

Som likes to see a knee-length feathered skirt paired with a simple white menswear-style shirt or a camisole. "Show some leg," he advises, "and wear a strong shoe."

Naeem Khan, who has twice dressed Michelle Obama for black-tie state dinners, said in a phone interview with The Associated Press that he favors the "cloud effect" you'll get from ostrich feathers on a grand-entrance gown.

A stiffer feather — perhaps a rooster feather — can add a bit of a rock 'n' roll texture to a skirt or vest, Khan adds, and other feathers can be used on outerwear for warmth. "I've used them in a practical way, on vests and jackets and capes. You can use them like fur."

Meanwhile, designer Pamella Roland's favorite feathered look from her fall collection is a jersey dress with lace sleeves and ostrich feathers. "It's a very glam look."

She has had feathers in her collection since "Day 1," and, personally, she has several times worn a feather capelet with a simple black dress.

With most of her clients in Florida and California, she notes that it's nice to have feathers as a fur alternative. "These ladies love to dress up, but you can't really wear fur in the sunbelt. ... You can wear feathers year-round — maybe white feathers for spring and black for winter."

Look for style commentator Mary Alice Stephenson to be wearing this fall a delicate top tipped with feathers around the neckline to offset masculine, high-waisted trousers, or a feather tank under a jacket with a pencil skirt. "Feathers inject glamour into clothes that are more straightforward, edgy or masculine," she says.

She also gushes over Alexander Wang's sexy, strappy sandals with a pouf of pink feathers at the toe. "My feeling about feathers is, if they're done in a subtle, sensual way, then it's something you want to embrace for fall," Stephenson says.

But too many tufts run the risk of a Big Bird effect. "That's easy for me to say, being 6 feet tall. If I was swathed all over in feathers it would be too much," Stephenson says. "Taking the runway to your life is about seeing feathers at the Pucci fashion show, and you see how to wear a feather purse from Talbots, or a statement necklace with a feather, or even feather shapes or prints."

Lots of people are trying out the trend in their hair, reports Brenda Pederson, stylist at the Oscar Blandi Salon in Manhattan. There's been a burst in requests over the past two months, she says.

It takes just a few minutes to thread a feather into dry hair. "Most of the process is deciding where you want it to be and what color you want. ... I think it's a new trend, makes people happy. It's quick and easy, and it's not a big commitment like a new hairstyle," Pederson says.

She had a purple one in her own hair for three weeks, although the feathers can last up to six. Mostly tweens, teens and 20-somethings are getting it done, but one woman in her 50s came in — and looked great when she walked out, Pederson says. "It looks good on every type of hair and hairstyle. It's not for the conservative, though."

When "American Idol" stylist Soyon An first used feathers on Crystal Bowersox last year, she had to get them from a craft store because they weren't readily available; now they seem like they're everywhere. "It's not just for the stage — or even just for your hair or earrings," says An. "I think feathers are a great look for an event or cocktail party."

On the more casual, approachable side, she's seeing feather prints on T-shirts and bags inspired by bohemian, Indian and Peruvian looks, especially in color combinations with turquoise, white and brown.

Stephenson encourages women to give it a try — even if it's in small, measured doses, and maybe in black at first. But more important than color, style or the wearer's age is to wear it with confidence, she says. "People are really intimidated by feathers ... but they can be a really great tool."

Treat them like sequins, she says, which you'll now find on as many T-shirts as evening gowns.

As he's crafting a feather piece, Khan says he uses them as if they were indeed sequins or other embellishments such as crystals or beads. They're in the same price range, too.

On a technical level, they're not more difficult to work with, he says, although, not surprisingly, you need a light touch.

It's the same thing with wearing them. "Yes, you have to treat the garment with care, but you can sit in a feather skirt and they don't all fall off," says Som. "Feathers are delicate but not as delicate as you think."

And, if one or two fall off, it's OK, they're a calling card for someone with a lot of style and glamour, she says. "Think of it like perfume, you leave a mark that you were there in a very fashionable way."