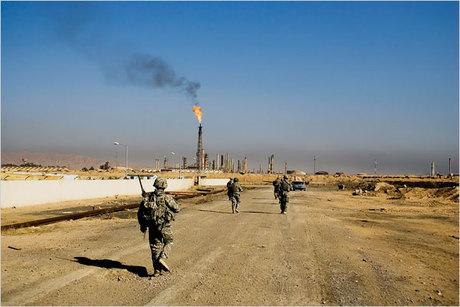 Iraq aims to complete the "liberation" of the strategic northern Shiite town of Tal Afar from militants in a matter of hours, a security spokesman said on Wednesday, as insurgents attacked the country's main oil refinery and seized more territory in the north.

Security forces plan to accomplish "the liberation of the entire town by dawn on Thursday," the spokesman said, after which they will head for militant-held areas in the city of Mosul, to its east.

Iraqi forces pushed into new areas of Tal Afar on Wednesday during heavy fighting with militants, a provincial councilor said.

The Shiite-majority town is the largest in the northern province of Nineveh not to fall to militants, and is located along a strategic corridor to Syria.

It has been the scene of fierce fighting for days.

Also on Wednesday, Prime Minister Nouri al-Maliki vowed on television that "we will face terrorism and bring down the conspiracy," adding that "we will teach (militants) a lesson and strike them."

He also said the country's security forces, which wilted in the face of a major militant offensive that overran all of one province and chunks of three more in a matter of days last week, had suffered a "setback" but had not been defeated.

That would provide a base from which to launch operations to recapture Mosul.

With regional tensions rising, Iranian President Hassan Rouhani said the Islamic republic "will do everything" to protect Shiite shrines in Iraqi cities against the militant assault.

And Saudi Arabia warned of the risks of a civil war in Iraq with unpredictable consequences for the region, while the United Arab Emirates recalled its envoy to Baghdad, voicing concern over "exclusionary and sectarian policies."

The crisis, which has displaced hundreds of thousands of Iraqis, threatens to break the country apart, while the assault on Baiji oil refinery Wednesday further spooked international oil markets.

The attack on the refinery complex, in Salaheddin province north of Baghdad, was launched before dawn.

The refinery was shut down and some employees evacuated on Tuesday due to a drop in demand caused by the militant drive.

World oil producers have cautiously watched the unfolding chaos in Iraq, which currently exports around 2.5 million barrels of oil per day. They have stressed that the country's vast crude supplies, mostly in the south, are safe -- for now.

The militants' swift advance has sparked international alarm, with the U.N.'s envoy to Baghdad warning that the crisis was "life-threatening for Iraq."

Analysts suggested that the country could unravel, surviving at best as a federal state.

John Drake, an expert on Iraq with British security group AKE, was asked if Iraq could remain united.

"I don't think it's impossible, but it is highly unlikely," was his verdict.

Meanwhile, the Indian foreign ministry announced that 40 Indian construction workers had been abducted in Mosul, the first city to fall in the offensive.

Last week, as the offensive got underway ISIL fighters kidnapped 49 Turks in Mosul, including diplomats and children, after earlier seizing 31 Turkish truck drivers.

In a bid to see off the offensive, Maliki sacked several top security commanders Tuesday evening, then stood alongside several of his main rivals in a rare display of unity among the country's fractious political leaders.

The dismissals came after soldiers and police fled en masse as insurgents swept into Mosul, a city of two million, on June 10.

Uhm, it's the iraqi army your talking about, not exactly known for being smart. No secular arab army seems to be, especially not the syrian one.