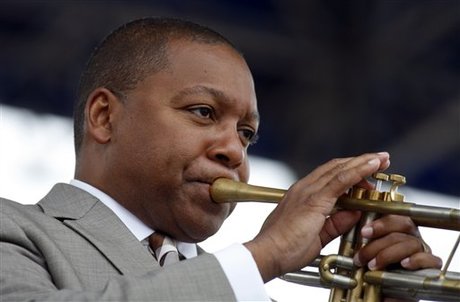 Famed American trumpeter and composer Wynton Marsalis has shared memories of his childhood and played a few tunes in South Africa as a prelude to headlining Johannesburg's annual jazz festival.

Marsalis talked about his life Tuesday during a question-and-answer session at Johannesburg's Market Theatre. Later this week, he will perform at the city's Joy of Jazz festival.

As a trumpeter, Marsalis has won both jazz and classical Grammy awards. As a composer, he was the first jazz artist to win the Pulitzer Prize, in 1997 for "Blood on the Fields," a three-hour work for singers and jazz orchestra that explores the themes of slavery and the creativity of black Americans.

Marsalis' tribute to black American music has not ignored its African roots. His "Congo Square" evokes a New Orleans neighborhood where African slaves performed ancestral dancing and music, and was written for drumming for jazz orchestra and Ghanaian percussionists and singers.

Sibongile Khumalo, one of South Africa's best-loved singers, welcomed him Tuesday as a "cultural activist" to the Market Theatre. Under white racist rule, multiracial audiences and casts challenged apartheid with original art at the Market.

Marsalis, holding his trumpet lightly between his knees, described growing up in a large family in small Louisiana towns.

"We lived in the South, they grew up in segregation," he said of his parents. "It wasn't a picnic."

His jazz pianist father found work scarce as audiences turned to rhythm and blues. The racial turmoil of the time and the nascent women's movement created new stresses for his family, he said. He said other boys in his neighborhood were fatherless.

"They'd want to come sit in my house to see what it was like to have a dad," said Marsalis, who also treated the small audience gathered on a Tuesday morning to a sampling of his trumpet playing.

He praised his father's integrity and his mother's intelligence, and said both were optimists.

John Kani, an internationally known South African actor and former director of the Market Theatre, said South Africans also were optimists after decades of struggle. Kani, who took part in Tuesday's question-and-answer session, said Marsalis's visit was testament to a growing culture of jazz appreciation in South Africa, which has its own rich musical traditions.

Khumalo asked Marsalis whether his drive to succeed was in part for his father.

"It was definitely for him," said Marsalis, whose brothers include trombonist Delfeayo, saxophonist Branford and drummer Jason.