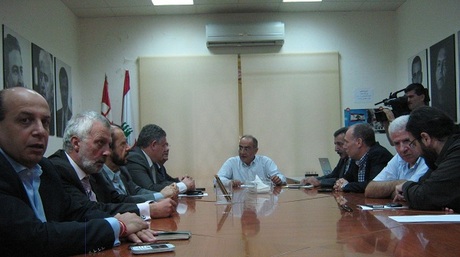 The March 14 forces on Wednesday voiced their rejection of “all extremist movements,” reiterating the call for “building the state and the immediate election of a new president.”

“Today, more than ever, the (March 14) general secretariat announces its rejection of all extremist groups, whether they resemble Hizbullah or the ISIL (Islamic State of Iraq and the Levant),” the secretariat said in a statement issued after its weekly meeting in Ashrafieh.

Militants spearheaded by the ISIL, an al-Qaida breakaway group, have made stunning advances in Iraq, seizing control of vast swathes of territory in a span of few days. Hizbullah has openly declared sending fighters to Syria to assist the embattled regime against “takfiri” groups seeking to topple it.

The general secretariat stressed that its project “was and will always be struggle to cross into a complete civil state that would be a role model for the countries of the region, which has entered a long travail.”

“These are the beliefs of March 14, which have not and will not change regardless of any developments in the region,” it added.

The secretariat reminded of the stance of al-Mustaqbal movement, “which on February 14, 2014 reiterated its keenness to clearly and openly reject extremism, whichever side it may come from.”

The March 14 General Secretariat also noted that it is “continuing meetings in the regions and political activities because coexistence in Lebanon is a common national responsibility.”

But it warned that “tyranny only breeds tyranny and violence only breeds violence,” pointing out that “Lebanon, which had experienced sectarian polarization and killing before anyone else, is urged today to be an example for coexistence and respecting diversity.”

To this end, the general secretariat called for “completing the process of building the state, the immediate election of a new president and creative interaction among the components of the diverse Lebanese social fabric.”

Bravo ... There is no difference between ISIL and Hezbollah. Both illegitimate armed paramilitary and terrorist groups shortcutting their way to power by the use of force, murders, threats and intimidation.

Hezbollah must choose between being a political party or a armed terrorist organisation. It cannot be both.

There are many ways for murderers to kill their enemies. Head Chopping is actually one of the most "humane" way to finish them off. Hezbollah's methods are a little more cruel and includes the use of bombs, torture, bullets, rain of rockets, ... and the list goes on ! A terrorist is a terrorist whether or not he chops heads is irrelevant. And so is your comment !

It's the only argument he'll go by unfortunately.

@Iranpatriot : you're right, we die because of stupid idiots like you !

I would be amazed if HA would slam the Iranian Revolutionary Guard, but they're blood bothers, so I wouldn't think so.

U r totaly right flame hesbos are shites bearded guys not sunits as isil, hebos are there to protect shites shrine and to avange ali hussein and co, not like isil and their sunit fundamentalist, hezbos beard are big and round shapped not as scarce as isil, hezbos puts round tubans not in conic shaped stuff like these isil, hezbos militant women are all well dressed in classy black tissues covering all there bodies and sit beside on official meetings, isil women donnot even attend meettings... U see all the differences...
Well as for similiarity (only one if i may) assad airplanes donnot bomb isil (or wait for them to leave positions before) nor hezbos...
This said go hv some chupachups flame...

and you forgot HA calls itself "islamic resistance" while ISIL is also an islamist group... HA has a koran as symbol on its flag while ISIL has the la illaha il alla thing...
and M8ers dare say hezbollah has nothing in common? LOL they are really blinded by their brainwashing!

both extremists different sects, that s all!

The terrorist explains his refreshing ideology

here are his head-chopping allies from back when

Well habib saddely religion always interfer, our christian brother in central affrica can teach isil/nusra/qaida a lot of stuff...
Any religious guided party can go to extrems and for no logic reason (believes...), so yes i would put isil, nusra, hezbos, there is also a lot of intersting iraki chite groups fighting, sorry doing their jihadist duty there....all same middle ages ideologies...

But to answer this question, hezbos/march8 enjoy good ties with hachem menkara and bilal chaaban, i think u know who those guys are and what is their ideology... They don't really differ from nosra (tried to implement charia in tripoli/mina, executed leftist, christians, put body in ciment and throw them alive in the sea...) are they really different from nosra? And if u say those guys changed u must go back 5 to 6 year ago when chaaban tried to implement charia and force hijab around his mosq, a libanese soldier got shot then.. So are they that different? Or are they onlyhere to be used? Like... Isil....
This said, chupachups guys, chupachups...

oh just like aoun who kept repeating that syria was a terrorist country and now licks their boots... think a bit habiba....

LOL, the February 14 Saudi-Wahabi coalition forgot to condemn itself.

Lol u are so smart karim, no wonder u support the very democratic, modern, laic march8 coalition led by the most progressist party in lebanon... Bravo...
U are perfectly right hezbollah is the simbole of modernism, and his aim and ideals (aka islamic republic of iran and big bro khomayini) are so much more civilized modern and democratic than saoudia...
And even ur sunit allies, aka hachem minkara, said chaanan...what a great exemple for all of us, they are so much more laic than sanioura and hariri (even retard daher is an angel compare to those guys....but thank for ur reflection...
Now karim, go dream of the perfect land of iranian revolution wich will extend to andalousia... And of course go have some chupachups man...

Sory saiid chaaban died few years ago, but march 8 got his very educated, modern, laic and progressist son billal chaaban as an ally in tripoli.. Nothing to be compared to those extremists moustapha allouch, ahmad fatfat, u know moustakbal and march 14 takfiri/saoudi/imperialist/zionist guys....
Now really go hv some chupachups man...

Wait for the Taqiya response as if they're flawless.