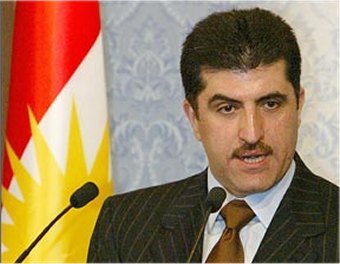 "Today we announce the formation of the government in complicated circumstances," said Barzani, the nephew of the region's president.

The division of ministries was not immediately clear, but the government includes the Goran movement, which had been in opposition.

Previously, the government was formed by the historic duopoly of Barzani's Kurdistan Democratic Party and the Patriotic Union of Kurdistan of ailing Iraqi President Jalal Talabani.

Negotiations have run since regional parliamentary polls in September, as top parties vied for posts.

Barzani also said that: "As we needed (Kurdish unity) in the year 2003 to protect the gains of our people, today we need the same stance to protect the areas of Kurdistan outside the administration of the region."

He was referring to the 2003 overthrow of dictator Saddam Hussein, and then to northern territory that the Kurds want to incorporate into their autonomous region, over the strong objections of the federal government in Baghdad.

A major militant offensive that began on June 9 has afforded the Kurds the opportunity to seize a swathe of this disputed territory, with Baghdad ill-positioned to do anything about it.

Federal security forces have either withdrawn or been swept aside by militants in various parts of northern Iraq. That has left the way open for Kurdish troops to move in, but this has put them in the line of fire from militants.

On Wednesday, Kurdish regional president Massud Barzani called on retired fighters from the Kurdish peshmerga security forces to sign up again to "support the peshmerga forces and prepare for all possibilities."