Franjieh: No President Can be Elected without Assad Consent 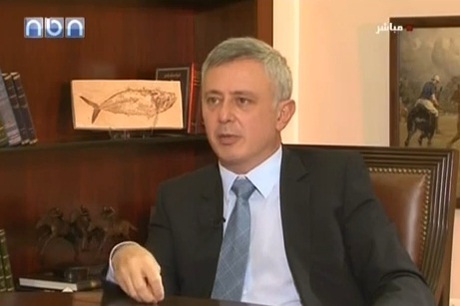 Marada Movement leader MP Suleiman Franjieh on Wednesday announced that any candidate must enjoy Syrian President Bashar Assad's approval to be elected a president in Lebanon, noting that the embattled Syrian leader would be “pleased” if Free Patriotic Movement chief MP Michel Aoun manages to reach the Baabda Palace.

“No president can be elected in Lebanon without Bashar Assad's consent,” Franjieh underlined during an interview with NBN television.

“Assad will be pleased if General Aoun becomes president and this is what he has announced and Aoun knows that Assad admires him,” Franjieh added.

Commenting on Aoun's remarks that he would guarantee former Premier Saad Hariri's “political security” if he returns to Lebanon, the Marada chief described the statement as a “slip of the tongue.”

He pointed out that the FPM leader did not mean that he knows the parties that might seek to assassinate Hariri.

In response to a question, Franjieh said he does not support Aoun's proposal on staging parliamentary elections in the absence of a president, saying “we had agreed in Bkirki not to hold elections under the 1960 (electoral) law.”

Pressed several times to reveal whether he would eventually agree to holding the polls, Franjieh said: “I believe that national accord is more important than anything … the entire system is wrong nowadays.”

Earlier on Wednesday, lawmakers failed for the seventh time to elect a new president as differences between the rival parties seemed not to be abating.

The failure to choose a successor to Michel Suleiman, whose term expired on May 25, is the result of the boycott of the majority of March 8 alliance's MPs.

Aoun, whose Change and Reform bloc is among those who caused lack of quorum in parliament, has said he would run for the presidency if there was consensus on him.

lol the president of Lebanon needs the acceptance of ASSad...hahah idiot!!

There you have it ladies and gentlemen. A "slip of the tongue" and "No president can be elected in Lebanon without Bashar Assad's consent,”. Shameless, worthless, traitors, unpatriotic, cowards would be the nicest things anyone can say about this scum bag and the mighty deserter.

Seriously, how embarrassing is this for the Lebanese people. Shameful.

how does what you stated not make it embarrassing? if anything, it makes it even more embarrassing to anyone with any self respect and a shred of patriotism.

Why would anyone try to defend or justify this moron's words? Don't bother with your " I know he is an Assad bootlicking worm.....BUT" justifications. The mareeda movement and the not so free and patriotic movement apparently cannot move with Syrians blessings. Bunch of goat herders.

aoun is the perfect puppet for the syrians, that is why M8 are desperate that he is elected to please their masters... and they talk about "no foreign powers shall decide! " LOL @ those hypocrits!!!
the man that said that syria was a terrorist country, that no good to come to Lebanon till the assad family rule over syria, that this regime must be eliminated... now? for the chair, he sold his soul and principles...
and there are still idiot sheep to follow him LOL
and they talk about independance? what a farce they are!

every one in power praised the syrian regime at the time... it was either that or die... LOL - even aoun said they were obliged to praise syria!- but some after worked to try and make Lebanon independent from the ones that sucked lebanese economy and killed hundreds while others are still praising the very same regime and work for them with no shame...
so i will rather spit on those who still collaborate with syria knowing the direct harm they caused and are proud of it than others who ally other countries now out of politics even if it can be debatable!

"Have any lebanese president been selected in lebanese history who did not have the approval of the KSA and Zionist America??? "

yes there are.... remember a bit that's all

if you are honest with yourself you will find the answer!

In any other civilized country, Frangieh's "career" would be over after those remarks. I don't care if you're M8 or M14, think about what he is saying carefully. If you have one shred of patriotism for your country, you cannot defend any person that says "no LEBANESE president can be elected without X's consent. Who the hell is Assad to give us his "consent"?

Lol ok, my apologies to any nawar on here.

Am i reading this correctly?? Lebanon has its own independence... why would Lebanon need the ok of syria?? someone tell me whyy? and how is anyone ok with it??? how does it make sense to anyone unless you are from the corrupt shee3a sect

To hell with Assad// it is time to get rid of the creep.

If you have watched this interview you could hear vaugely in the background sleimans favourite song being played by condy lauper : true colours. Pathetic excuse for a human being.

another traitor to his country! he promotes assad as if he was his father!

Qawmi bigjohn vehemently disagrees, you can find him vehemently disgreeing on every story that has anything to do with Lebanon's relation with Syria, like this one notice how today he did not comment on anything else

"It is a slip of a tongue".
no mate it is not ,you might call it KHARAF.
Elgeneral am yekhraf...

Wolf, you are calling for patriotism and secularism and that is noble.
But a dictator will not work in Lebanon because if he was from a certain sect, the other sects will rise against him.
Fouad Chehab did a good job because he was an honourable and intelligent man and in fact acted like a president should act under the pre-Taef constitution.
Post Taef Lebanon can only be governed on an inter-confessional consensual basis.
Moreover, Lebanon as a country is still in survival mode. we have so many existential issues to deal with:
Likud Israel, war-torn-Syria, The Islamic Republic of Iran's regional ambitions, the 400,000 Palestinian refugees, the 1 million + Syrian refugees.
It is a miracle that Lebanon is still standing! The best thing is to "wait and see" what will happen regionally and stay as united as we can, given our political differences.

Indeed, today the current confessional system is sick but it is withstanding the regional chaos. Changing it amid this current instability can have dangerous consequences on everyone.
Let us see the kind of nations and political systems that will emerge around us post civil wars. That might take a few years. Meanwhile, we should hold on to our error laden system until our neighbourhood becomes peaceful and then we can start house cleaning.

@FT : when the candidate you support sinks to such low levels as intimidating his way to the presidency and his partner in crime admits that ASSAD is Lebanon's kingmaker, you shut up.

Bunch of traitors daring to talk about Saudis ? Syria and its allies robbed lebanon of its wealth, Saudi spent more money in Lebanon than any one else. So unless you can come up with a valid reason to cry like a little girl, shut up and shove it !

Yalla go play with guns or go fight in Syria for Bashar if you believe in these illusions ...

Unless he's condemning this, he is a traitor.

2 days ago, Aoun basically threatened Hariri with his security (go read it on Tayyar because you believe M14 sites are lying).

Now frangieh is saying Bashar alone decides who our president it.

Yes, both him and Aoun are traitors along with all their followers.

@FT : would you accept Aoun as a president if his only way to power was through Assad's blessing ?

What does that tell you about Aoun ?

The difference is M14 MPs do not make threats and are too divided to accept orders from a single pole of influence ! They make consensus based decisions.

On the other hand, M8 are forced to a single position. And they make threats and blackmail their way to power !

you zahliote ,did you forget what did the sunnis to you , go read histroy stupid ...
i do not understand stupids as such who drop comments without knowing what the hell they talk about