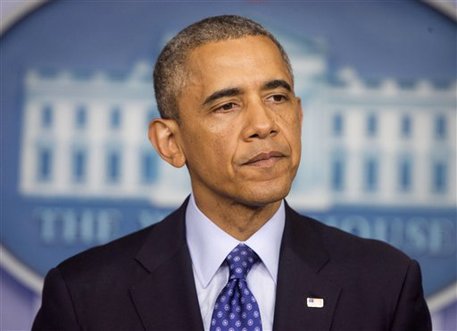 U.S. President Barack Obama on Thursday said he was ready to send 300 military advisers to Iraq and if necessary to take "targeted" and "precise" military action to counter radical Sunni fighters.

Obama said Washington was ready to deploy advisers to study how to train and equip Iraqi forces and had already increased its surveillance and intelligence capabilities in the country.

The U.S. teams could set up joint operations centers in Baghdad and near Mosul, the northern Iraqi city that fell to extremist rebels last week, the president suggested.

"Going forward, we will be prepared to take targeted and precise military action if and when we determine that the situation on the ground requires it," Obama said at the White House after meeting senior members of his national security team.

Obama said it was a good investment for Washington to intervene in Iraq if it prevented Islamic State of Iraq and the Levant (ISIL) fighters establishing bases which could eventually pose a threat to the West.

But he repeatedly insisted U.S. troops would not be going back in to direct combat in Iraq, two-and-a-half years after the last American soldier came home from the war.

Obama did however pledge to help Iraq bolster its own forces against the advance of the radical Sunni fighters.

"We're prepared to send a small number of additional American military advisers, up to 300, assess how we can best train, advise and support Iraqi security forces going forward," Obama said.

"Shia, Sunni, Kurds, all Iraqis must have confidence that they can advance their interests and aspirations through the political process rather than through violence," Obama said.

"It is clear, though, that only leaders that can govern with an inclusive agenda are going to be able to truly bring the Iraqi people together and help them through this crisis."

Obama warned that he would not authorize political operations that were designed to promote one sect in Iraq over another.

And he said that he would dispatch Secretary of State John Kerry to Europe and the Middle East this weekend to consult with U.S. allies on the next steps forward on the Iraq crisis.

seems you envy those with an IQ higher than yours, anyway very easy knowing yours is close to zero...
you are obsessed with it, you judge everyone by his IQ... don't you know that having a high IQ does not mean one is intelligent, your mommy never told you that? LOL
get a life and forget there are people that are way smarter than you, it gives you nightmares it seems !!! LOL

"US drones will most probably target maliki's opponents 'by mistake'"

hey it is all what it is about! targeting ISIL, maliki's opponents! LOL

but stay cool , we know it must be hard for you to see the USA allying your friends! but didn't your pimp say there was NO shame in asking for the US help? LOLLLLLLL