Report: France Asks What Aoun Can Offer as 'President' 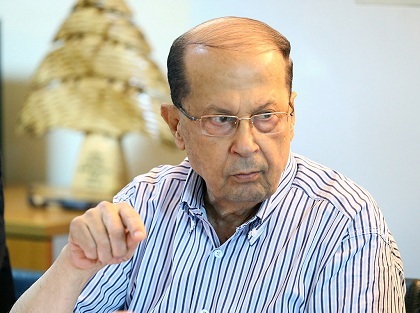 French sources raised questions on Friday on what the Free Patriotic Movement Chief Michel Aoun can offer if he was elected as Lebanon’s president, and on the possible guarantees that could be given by Hizbullah in that regard.

France and some of its partners in the region blamed Hizbullah and Iran for obstructing the presidential elections in Lebanon, the pan-Arab al-Hayat daily quoted French sources well informed on the situation in Lebanon.

They added that France considers the method that Iran uses to exert its influence in Lebanon, Iraq and Syria as “highly dangerous”, asserting that Lebanon pays a dear and dangerous price for its influence.

The sources added that any agreement between Mustaqbal leader Saad Hariri and Aoun on bringing the latter to the presidential post should, before any western or Arab approval, mainly guarantee whether Hizbullah and Iran are ready to offer pledges on Lebanon's sovereignty, allow Lebanon to distance itself from Syria's war and on the Special Tribunal for Lebanon.

According to the French analysis, the issue at hand is not linked to the agreement between Hariri and Aoun on bringing the latter to the post, nor to the French blessing in that regard. It is strongly linked to what Aoun can actually offer and to the guarantees that could be given by Hizbullah.

Aoun said earlier that he is waiting for al-Mustaqbal movement to nominate him or endorse a “new candidate” for the presidency.

Parliament has so far failed to elect a new president over differences between the March 8 and 14 alliances.

God bless General Aoun for protecting Lebanon from the evil schemes of the kingdom of terrorism.

So you dislike Saudi Arabia because it gave billions of dollars to Lebanon to rebuild and to stabilize its currency. Saudi visitors poured billions into Lebanese real estate and entreprizes.
Saudi Arabia has no militia in Lebanon and is giving billions to our army in weapons.

Iran and the Assad regime on the other hand are using Lebanon as a proxy, backing a militia and arming it to fight their wars first against Israel and then to protect the Assad regime.
Iran spent billions on weapons and on buying people to kill for its empire.

Tens of thousands of Lebanese from every confession and sect work in Saudi Arabia. Make money in Saudi Arabia and send it back to their parents back home.
Iran employs Lebanese to die on its behalf.

What business is it of France? Did we ask what Hollande or Sarkozy could offer as President?

Butt the hell out of our affairs!

at least he is a Lebanese patriot.not a traitor or a deserter..something your clown could never offer.

Not failed ya flame. We Christians are still here and still have a role in our country thanks to Geagea's resistance. If it wasn't for the Lebanese forces you would be selling homos and fool by the side of the road. Wow how quickly you forget the sacrifices of so many. Geagea's program is available for all to see and scrutinise. Unlike Jedo aoun who wants to be crowned king and call it an election. Regardless of what he has to say he clearly cannot deliver. His beloved MOU has been shelved by HA and he is happy to provide Hariri protection for his vote. Lol he cannot even do this. So the real question is what has an 81 year old army deserter who is allied to a mafia have to offer?

lady gaga will offer '3afou 3am' on all extremist murderers of roumieh n will guarantee safe passage n transp. of all da3ish from airport to syria n week stay in ma3rab hotel plus food n beverage...falyakoum da3ish herreyyyyyy!!! :)

So your memory only goes back to 1990 ya aouni and selective at that. I didn't think you were that old. As for making a living posting on naharnet doesn't count. You are the true resistance flame., resisting commence sense and being part of the civilised world.

this question is the real question that has been addressed to aoun.
if he wants to become president to finalize the destruction of the Lebanese state to the benefit of his hizbushaitan masters, there is no need for him being a president.

I'm not for Aoun to be president. I have my reservations. However who the hell is France to ask this question?

they created the failed state called Lebanon, they got the right to look after their baby...

Actual lebanon, ie greater lebanon never was an independant entity.
France is over 1000 years, franks 2000 years...
Please bring on some Phoenicianist BS, i'd love to destroy it...

ya jaheel, u obviously dont understand what Phoenicianism is, or pretend to ignore it coz u dont have evidence that greater lebanon is no french invention...

Aoun would say " I will return all the cutlery I stole while hiding in France, please let me be the king"

forces your argument is true before geagea became LF leader by force and blood
can you give 1 battle LF during geagea leadership with the Syrians ???!!!
that not to say that the forces of geagea during zahle battle ran away

Jerry
you're wrong nothing is not the answer as Aoun can offer a lot such as chaos, destruction of what is left of Lebanon and so on.. so on...

how come mafia lords would accept a clean guy such General Aoun as a president?! he will ruin all there plans in robbing el akhdar wel yebes!!!

Clean guy lol. He who manipulates his position in power to favor his family members he who could have apparently stopped the killings of M14 figures ( his words not mine) but didn't because they weren't his allies but if Hariri nominates him he would " talk to those causing the killings" ( again his words not mine) and ask them not to kill Hariri. Or in other wards he is telling Hariri nominate me or HA and I will kill you. He is the mafias third wheel. Too spineless to challenge them and would have hussouny's child if he was asked. And you ask why would they nominate him. Haram.

At 81, Aoun decided to retire in Baabda and spend our tax money on his pension.

Forget France, Syria or Iran, Aoun does not respect any Lebanese citizen. He did not have the decency to give us an overview of the political, economic, legal, social and cultural policies he intends to pursue once in office.
How is he going to make our lives better?
No he would rather under the table deals with Hezbollah, Syria, Iran and lately Hariri in order to become president.

The presidency is no retirement home. It is not a prize. It is a job. The President of Lebanon works for everyone of us. We need to see your plan Jeddo Michel.

more than what Francois Hollande will ever offer his country, and that is for sure! The man's a joke, I would have died of shame had I been French!

Thank God you are not French:)

Hariri's political security is derived from the people who elect him and not from a sellout traitor like aoun.

Hariri's political security is derived from staying away from Hezbollah assassins :)

and of course a shia extremist like you define relevance and lebanese identity. typical..

This idea of hating people needs to get removed for us to move forward into a positive future.

cedar
this is the best comment you posted
right on bro

= chaos and division and obey the orders of assad as a syrian province!

'What Aoun Can Offer as 'President' ?'

Aoun answered the other evening, Hariri won't be killed if he's president...Thats what he has to offer.
Elect me or i'll get my syrian and iranian buddies to bomb you...

Aoun has nothing, can offer nothing. All that he had he sold to Assad and Iran so that he could return to Lebanon in May 2005 without an indictment to greet him on arrival.