Sistani: Jihadists Must Be Expelled from Iraq Now 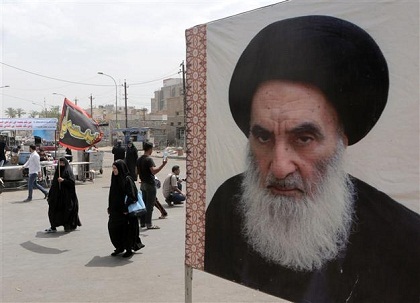 The call came after U.S. President Barack Obama stopped short of acceding to Maliki's appeal for air strikes on the Islamic State of Iraq and the Levant (ISIL), prompting neighboring Shiite Iran to charge that Washington lacked the "will" to fight terror.

A swift militant offensive, led by the jihadist ISIL, has overrun swathes of northern and central Iraq, threatening the United States's already damaged legacy in the country.

Grand Ayatollah Ali al-Sistani, a revered cleric among the Shiite majority, called on Iraqis to band together against the insurgents before it was too late.

If ISIL is not "fought and expelled from Iraq, everyone will regret it tomorrow, when regret has no meaning," his spokesman announced on his behalf.

The reclusive Sistani, who heads a council of senior clerics, said Iraq's next government must be "effective" and avoid "past mistakes", an apparent rebuke to Maliki, premier since 2006.

His remarks came after several senior American figures pushed Maliki, seeking to retain the premiership after winning a plurality in April 30 elections, to work with Iraq's Sunni Arab and Kurdish minorities.

U.S. Vice President Joe Biden, Defense Secretary Chuck Hagel, Chairman of the Joint Chiefs General Martin Dempsey and David Petraeus, the former top U.S. commander in Iraq, have all either called for Maliki to be more inclusive or outright criticized him.

Obama said Thursday that Maliki's actions could dictate the country's fate, amid a growing feeling in Washington that the Iraqi leader would do best by moving on.

Former U.S. ambassador to Baghdad James Jeffrey said there has been a "definite uptick" in Washington's criticism of Maliki.

"Everybody is a bit at fault in Iraq on the sectarian thing, but Maliki over time did become more" sectarian, said Jeffrey, who left the post in mid-2012.

"He just isn't the solution to a unified Iraq."

Obama, who based his political career on ending the costly eight-year U.S. intervention in Iraq, has insisted Washington is not slipping back into the morass.

But he has offered as many as 300 military advisers and left open the possibility of "targeted and precise military action if and when we determine that the situation on the ground requires it".

Washington already has an aircraft carrier in the Gulf and is flying manned and unmanned surveillance flights over Iraq.

The latest offer was the most concrete action announced by Washington since the crisis erupted on June 9. But it fell short of Iraq's request for air strikes and drew derision from Tehran, which has offered its cooperation despite decades of enmity.

U.N. chief Ban Ki-moon warned that military strikes against the jihadists could prove counterproductive without any movement toward inclusive government.

Earlier this week he said the conflict threatened to spill over Iraq's borders, interlocking with the civil war in neighboring Syria, where ISIL is also fighting.

Thirty-four members of the security forces were killed in a town on the border Friday, while 30 pro-government Shiite militiamen died in a firefight with insurgents northeast of the capital in Diyala province.

Shiite-majority Tal Afar is located along a strategic corridor to Syria, and the largest town not to fall to militants in the northern province of Nineveh, most of which has been overrun.

An army lieutenant general, asking not to be identified, told Agence France Presse that Iraq needs U.S. help "to stop terrorism and eliminate it... especially through air strikes against specific targets".

Meanwhile, U.N. aid agencies said they were rushing supplies to Iraq to help more than one million people driven from their homes by the current fighting and unrest earlier this year.

Around 500,000 people have been displaced in the western Anbar province, notably the flashpoint city of Fallujah, since January, the UN says.

A similar number fled after the northern city of Mosul fell to ISIL last week, and tens of thousands have hit the roads in the eastern province of Diyala, near Baghdad, and Salaheddin, north of the capital.

This is the guy that called the shias not defend iraq from US invasion. Comment on his fatwa from ali al amin :
http://youtu.be/tjTj2zHIITk

While ISIL needs to be eliminated, this must be done as part of a grand compromise with the Sunni community that has been persecuted and marginalized under Maliki. Also those who support the Syrian regime are the last one to talk. In Iraq, they want majority rule (because it is Shia and pro Iran). In Syria, they oppose it.

expelled ?!!!!!they were sent to Syria and Iraq to be exterminated
as president busch said after 911
will take the war to you and will exterminate you till the last one
god bless democracy

Jihadists must also be expelled from Lebanon ! Oh wait, Hezbollah is a jihadist movement.

(Waiting for Southern to explain that Hezbollah's jihad is holy whereas other jihadists aren't... may you all rot in hell).

Nice try FT and your twenty aliases. We ve seen you insult families and sects with your ongoing rants.

Nice ... The discourse is getting better and better everyday.