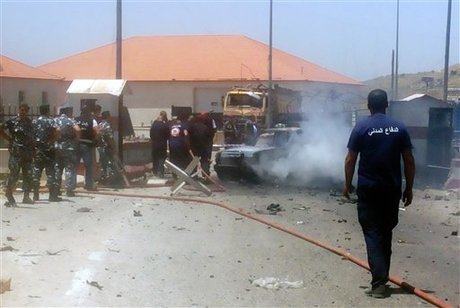 Western countries decried on Friday the Dahr al-Baydar suicide bombing that targeted an Internal Security Forces checkpoint which killed one and injured several.

The U.S. embassy in Beirut condemned the attack on its twitter account reiterating “support to Lebanon in its fight against terrorism.”

On its part, the French Embassy in Lebanon advised its resident nationals to limit their movements on Lebanon's territory.

A suicide bombing on Friday targeted an ISF checkpoint in Dahr al-Baydar.

Aoun : ' i can guarantee Hariri's safety'.
Frangieh : 'no president in Lebanon without Bashar's approval'.

We got the message Bashar...

set up the fire then come as a firefighter to put it off... typical syrian and hezbi strategies....

coz u can prove that :
- baghdadi exists
- baghdadi is Ibrahim al-Badri
- that he was arrested
- that M14 did not condemn 1000 times all form of terrorism, from isis to hizbiran...

no real evidence in there. Even so, 5000 da3shis cant take half the country. All sunnis are revolting against Maliki's and Qassem Sulaymeni's death squads and sectarian cleansing.
Ever heard about Ali Musa Daqduq ? He was officially released by americans. What do u conclude ?

Listen to analysis from a real LAF general :

“We either arrested or killed a man of that name about half a dozen times, he is like a wraith who keeps reappearing, and I am not sure where fact and fiction meet,” said Lieutenant-General Sir Graeme Lamb, a former British special forces commander who helped US efforts against al-Qaeda in Iraq. “There are those who want to promote the idea that this man is invincible, when it may actually be several people using the same nom de guerre.”