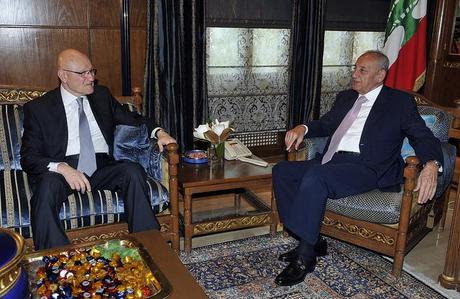 Speaker Nabih Berri and Prime Minister Tammam Salam stressed on Saturday the importance of political solidarity among the rival parties to confront terrorism in the country.

The tourist season is the first “victim of terrorism, which began to thrive in Lebanon after the developments in Iraq,” Berri said in comments published in local newspapers.

“Crying and condemnation press releases will not be enough,” Berri told An Nahar daily.

He pointed out that expressing support to security agencies isn't enough. “We are demanded to provide them with a political cover in order to carry out their tasks.”

Berri expressed concern that the country will head into the “unknown amid the turmoil in the region, if officials failed to learn the lesson.”

On Friday, a suicide bomber detonated his vehicle near a police checkpoint in the eastern town of Dahr al-Baydar, while the Internal Security Forces Intelligence Bureau raided two hotels in the capital, arresting suspected members of an al-Qaida breakaway group allegedly plotting terrorist attacks in the country.

After the bombing, security forces also deployed at all the entrances to Beirut, preventing trucks from entering the Lebanese capital for fear of more bombings.

The Lebanese are deeply split over the civil war in neighboring Syria, with Sunnis largely backing the insurgency and Shiites siding with Syrian President Bashar Assad.

For his part Salam urged officials in comments published in As Safir newspaper “to assume their responsibilities in order to confront the terror challenges.”

He called on politicians to put differences aside as “the country cannot endure further rift.”

Agree wholeheartedly with this statement. It should also extend that the people should unite in protest at the shambles it's politicians are in and throw them out of power. Anyone found not performing their tax payer funded duties should be thrown out and the people should demand a new course for this sinking ship. Immediately.

Nice picture, the Sunni PM. Shia Speaker, and the Maronite President?? Let's not get used to these two way tete a tetes