U.S.: 'Region's Battles Must Not be Fought in Lebanon' 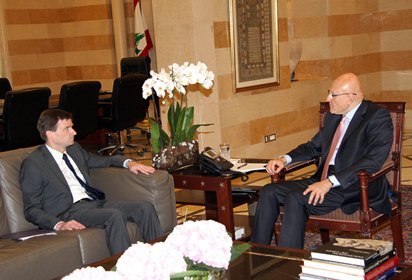 U.S. Ambassador David Hale on Monday warned the Lebanese against being dragged into the region's crises and said Lebanon needs a “fully functioning governance” so that international assistance becomes effective.

“Upholding the Baabda Declaration and adopting a true policy of dissociation from the conflict in Syria are essential,” Hale said following talks with Premier Tammam Salam at the Grand Serail.

“The region’s battles must not be fought in Lebanon,” the U.S. embassy quoted him as saying.

“That means Lebanese should not be drawn into the battles being fought by others,” the diplomat said in remarks tweeted by the embassy.

Hale reiterated his call for the immediate election of a new head of state, which he described as a “challenge.”

“For international assistance to be effective, Lebanon needs fully functioning governance in presidency, parliament and cabinet,” he said.

He stressed that the election was a Lebanese affair. “But costs of indecision (are) felt by everyone with a stake in Lebanon's stability and prosperity.”

The ambassador said Friday's suicide car bombing that targeted an Internal Security Forces checkpoint in Dahr al-Baydar at the entrance to the eastern Bekaa Valley reinforced the U.S. commitment to Lebanon.

“Lebanon's government and security institutions are working hard and effectively to counter terrorism and maintain stability,” he said.

“This is a time to close gaps so that Lebanon's security and stability can be reinforced,” Hale added.

As long as Lebanese are not united , like always in the past , regional battles will be fought in Lebanon. And the only ones to blame are the Lebanese themselves, they elect warlords who can only communicate through guns....

Is Hale saying (“fully functioning governance”) that Shiites in Lebanon should get equal voting rights to Christians, which would probably make Parliament seventy percent Muslim and Lebanon's government Shiite? I mean, that would be the "parade of horribles" worst-possible-interpretation, but is he advocating the dropping of the reverse power sharing whereby Christians are guaranteed half of Parliament ("Taef Accord") despite their much smaller demographic share? This would make sense: domestic stability via civil rights is the best defense against foreign troubles.