Geagea after Meeting al-Rahi: There is a 'War of Elimination' on Presidency 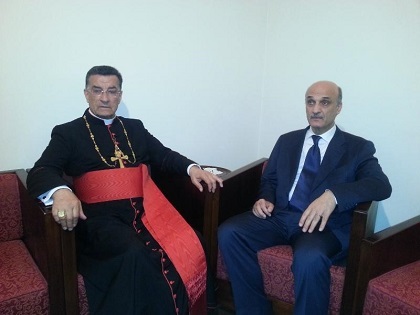 Lebanese Forces chief Samir Geagea expressed pessimism on Tuesday on the ability of rival parties to elect a new president, saying he was not seeing light at the end of the tunnel amid an ongoing “war of elimination.”

There is a “war of elimination” on the post of the presidency, he said, adding “no one is allowed to paralyze the country as a means to increase his chances” to reach Baabda Palace.

Geagea has slammed the boycott of Aoun's Change and Reform bloc and most of the March 8 camp's MPs of legislative sessions aimed at electing a president.

Unlike the LF chief, Aoun has refused to announce his candidacy for the presidency, saying there should first be consensus on him.

But the March 14 alliance continued to back Geagea, and its members remained adamant to head to parliament to elect a president despite the lack of the needed two-thirds quorum.

The dispute between the March 8 and 14 camps led to a vacuum at Baabda Palace after President Michel Suleiman's six-year term ended on May 25.

Geagea said he was “not yet seeing any light at the end of the tunnel although the solution is in our hands.”

He said earlier this month that March 14 was ready to agree with March 8 on narrowing down the presidential race to two candidates.

hahaha Mamazeinab. love the pic! are you sure you are allowed to use the internet?

I do it behind my husband's back. Cuz if he found out he would throw me in a ditch in the town square and have all the villagers stone me like they did to Soraya M. I'm sure you've heard about her.

At least he has a plan for Lebanon, your Syrian Iranian followers cares more about qalamun and Qordaha then their own country and Baabda palace. Your Syrian-Iranian militia intimidate by assisinations then plays the game of Israel and defense strategy....all those examples weaken the body and the state by the continued disputes of a uniform state because Iran and Syria fears being stabbed and the democracy game.

blablab.....I don't think that he had any intention or expectation to be president. He knows he would never be voted in. He just to make sure that Aoun wasn't voted in either.

This is the only language this criminal understands.. ELIMINATION. He eliminated thousands of people. And he ran for president! A mass grave worthy of those he murdered must be dug somewhere in downtown Beirut, as a reminder to his crimes. And a daily reminder to all who have chosen to forget this man's bloody history.

The game is clear. Hezbollah is in need of a Trustee for its Lebanon operations while the bulk of its fighters are out in Syria and Iraq fighting Iran's regional wars. Iran needs to be secure at "home" whil it's fighters are away.
Geagea is anathema to that Hezbollah requirement. Geagea could be trusted to erode Hezbollah's power in Lebanon, in conjunction with Mustaqbel while Hezbollah fighters are away.
Hezbollah wants Jean Qawajih, head of the Army, as Hezbollah already coordinates with the Army under his leadership.

The last guy Hezbollah wants is Aoun. He is unpredictable and not reliable to keep Hezbollah's holdings secure, though Hezbollah does control Aoun's financiers and ability to function, if Aoun is President then he will start looting the Ministries in earnest and become financially independent of Hezbollah and Iran.
Aoun remains a useful fool to Hezbollah with his inane insistence on becoming the consensus President. As long as he keeps that up, he gives Hezbollah cover to continue playing its game, so that blame is placed on Aoun, rather than where it belongs, on Hezbollah.

With Aoun to blame. The Christians stay divided and too weak to unite against Hezbolah, and, there is the general sense of futility and inability to act because how do you deal with the irrational crazy Aoun?? If Hezbollah were exposed as the culprit, and Hezbollah is as weak as it's ever been in Lebanon, right now, then there would be real peril,

But with Aoun, his Aouni, and the M14 Christians and Mustaqbel and Patriarch all placing total blame on Aoun, everyone has fallen for the Hezbollah strategy, thus buying Hezbollah time and holding its Lebanese assets secure.

So you don't think electing a president ASAP is a serious issue when it comes to keeping the country stable? Or was that just a poor attempt at a clever comment?

Mr geagea the only thing missing from your program for presidency is
fight of corruption , so tell the Lebanese how much money you got and from where , the very next day all Lebanon will vote for you as president if you come out clean
god bless democracy

Why is this guy stuck in the past? War of elimination is in his head.

Elimination of himself from the political scene.