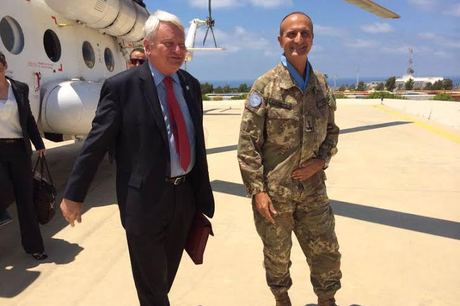 U.N. Under-Secretary-General for Peacekeeping Operations Hervé Ladsous said Tuesday that the world body was exerting all efforts to help the Lebanese army.

“We are well aware of the resource constraints the army faces and we are making every effort at every level to garner international assistance necessary to bolster its capacity,” Ladsous said following talks with Lebanese officials.

“I expressed my deep appreciation for the commitment that the Lebanese Armed Forces has continued to show in working with UNIFIL on the tasks mandated by (Security Council) resolution 1701, not allowing the competing demands on its resources to distract it from this critical imperative,” said the official after talks with Speaker Nabih Berri, PM Tammam Salam and army chief Gen. Jean Qahwaji.

“It is this spirit of dedication to the call of duty that has rendered the Lebanese Armed Forces today a beacon of Lebanon’s strength, and earned it the utmost respect not only of all the people of Lebanon but also of the international community,” he said.

UNIFIL said in a press release that during his meetings with the Lebanese officials, Ladsous discussed issues related to the implementation of resolution 1701, with particular focus on the situation in UNIFIL’s area of operations south of the Litani River, and the cooperation between the peacekeepers and the army.

Ladsous also visited the UNIFIL Headquarters in Naqoura, where he was briefed by the mission's commander Maj.-Gen. Paolo Serra and the Mission Staff on the operational aspects of UNIFIL, said the press release.

He also held a townhall meeting with UNIFIL personnel and mingled with peacekeepers, both civilian and military, in informal interactions, it added.