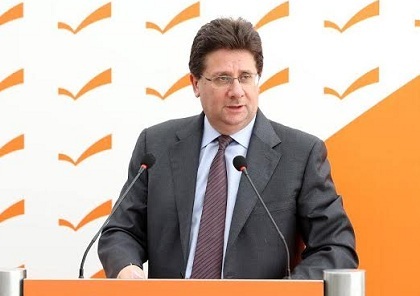 The Change and Reform bloc lamented on Tuesday the state of affairs in Lebanon, condemning the ongoing vacuum in the presidency.

MP Ibrahim Kanaan said after the bloc's weekly meeting: “The vacuum is a product of deliberate neglect and the solution lies in returning to the constitution.”

“What is to become of the presidency if we do not respect the constitution and National Pact?” he wondered.

Lawmakers failed to elect his successor after seven presidential elections sessions following a boycott of the majority of March 8 alliance MPs, mainly those of the Hizbullah and Change and Reform blocs, over an ongoing dispute over a candidate.

Addressing the bombing in the Tayyouneh area in Beirut earlier on Tuesday, Kanaan said: “Condemning bombings is no longer enough.”

He criticized how such incidents are being exploited to achieve political goals.

“Is it reasonable to link them to political files?” he asked.

“Aren't the security developments being used to impose certain realities on the Lebanese people?” Kanaan continued.

“The security developments should be tackled through security, not political, measures,” he demanded.

One person was killed and at least 20 wounded when a suicide bomber detonated himself at an army checkpoint at the Tayyouneh roundabout at the entrance of Beirut's southern suburbs in the early hours of Tuesday.

The car bombing came three days after a suicide attack in the east of the country which left one person dead and 30 wounded. The attack was the first in Lebanon since March.

MP Kanaan: “The vacuum is a product of deliberate neglect and the solution lies in returning to the constitution. What is to become of the presidency if we do not respect the constitution and National Pact?”

“The Maronite bishops synod after its annual retreat. “The absence of the head of state poses a threat to the country. The failure of lawmakers to attend parliament sessions to elect a new president, is unacceptable, considering that the delay in electing a new head of state violates the constitution and the national pact”” 19/06/2014

@FPM : how dare you talk about the constitution when you are breaching it every time you boycott the elections ?

still on your insulting spree to feel like a man fartthrower? LOL
no posts to comment this article only insults for those who disagree...

that is what FPM is all about: barking dogs never bite, just bark...

Let us be Lebanese under one flag one nation one army one president ...

Good information. Lucky me I ran across your site by chance (stumbleupon).
I've book-marked it for later!

Wow, amazing weblog structure! How lengthy have you been blogging for?

you made blogging look easy. The total look of your website
is excellent, let alone the content!