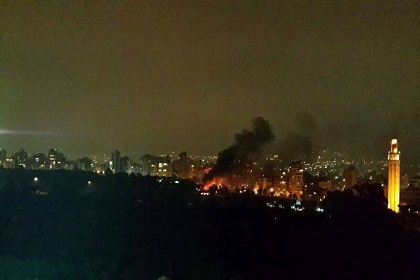 Security agencies detained a Syrian national accused of monitoring a number of streets while he was on his way to the eastern border town of Arsal, An Nahar newspaper published on Wednesday.

The man who is from Raad family was allegedly heading to Arsal to get paid for monitoring several streets in the capital Beirut.

The suspect confessed that he was paid $300 for each information he presented.

He also told security agencies that he was dealing with a man called Abou Mouhannad from the eastern Bekaa town of Majdel Anjar.

Amazing how they can find the culprits or their accomplices within hours when the security incidents are related to HA. Any news about the Shatah Assassins or any of the previous assassinations. This is a joke of a country!

No it was heading into dahieh as it was reported by media and police.

hey FT, you do not know the place of the bombing it seems... it occured at the opposite of the direction of badaro or tayouneh, hadi nasrallah street just before the army checkpoint leading Inside dahye......

so please spare us your ignorant posts....

FT it was heading into dahiye hand the car was on the wrong side if the road to avoid the army checkpoint. Do not turn it into a sectarian issue. Weather it was heading I to dahiye or into any other part of town I would react the same way. However the remark of eagledown is justified. We have seen a superb reaction and investigation when it comes to security incidents targeting dahiye. The same is not true when assassination attempts, assassination and explosions targeting m14 leaders happened.

so very true greatpierro... M8 double standards. they bark and cry when M8 is targeted but rejoice when it is the opposite.
swift investigations when hezbis are targeted but not a clue when anti syrians are...
pathetic people

@FT : according to your "theory", the car was rigged by HA !

@FT : no one is anti Shia. Just anti Kezb Weapons ! Understand this and shove your moronic assumptions ...

and there comes the FPM worm who is as usual caught in his lies and resort to stupid comments with zero counterarguments... pathetic liar

@FT : "cocked out bonobo" says the imp who claims the car came out of Dahyé :)

Enough is enough with these Syrian and Palestinian "refugees". Deport them all.

So much for the fplp and the Iranians.

FT you have a good point there. But eiil is targeting Sunni villages and fighting against Sunni tribes and bassists. Just do a research over internet about eiil how it is organized and financed and many evidences show that Iran has a hand. It seems also that the USA are also supporting eiil not that there are evidences but because the USA have categorically refused to help the moderate Sunnis.

funny how idiots when applied the logic they praise cannot stand others to use it... seems that idiocy is their trademark and copyrighted! LOL

they kept on saying that antisyrians were killed by antisyrians and when we tell them that M8 are targeting M8 they just insult others... proof that they arereal idiots....

It's ok, as long as they r finding the culprits, it's reassuring. We dont wanna Al Quaeda and co to act freely in Lebanon.
Remember that they found also the ones who bombed tripoli mosque, they stopped the plan of Samaha / Mamlouk...
So they are trying the best they can

Sure wreak has to be dealt with as it is intolerable that there are arms outside the state institutions. The same should occur in the Palestinian camps, especially those of the fplp, in brital, and last but not least in dahiye where hizbullah challenges state institutions and hides murderers or suspects. Do not forget that there are very high suspicions and evidences they many cars that exploded and killed m14 leaders have been rigged with explosives in dahiye.

Muslims are a problem for themselves and for others. Sects should be disbanded and the society should become laic to prevent stuff like this from happening.