ISIL Strengthened on Syria Border after Qaida Unit Joins it 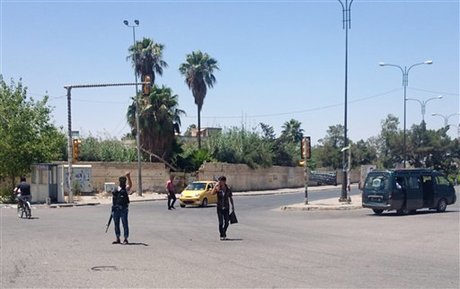 The local unit of Al-Qaida's Syrian branch in the tinderbox town of Albu Kamal on the Iraqi border pledged loyalty Wednesday to the Islamic State of Iraq and the Levant, giving ISIL control over both sides of the frontier.

The move is also significant because it reflects how ISIL is fast gaining the upper hand in eastern Syria, where it has been locked in combat with fighters from Al-Qaida franchise Al-Nusra Front and allied local rebels virtually all year.

Al-Nusra's oath of loyalty in Albu Kamal comes days after Iraqi security forces abandoned Al-Qaim, just across the border, and ISIL and other Sunni militants seized it on Saturday.

ISIL, which aspires to create an Islamic state that straddles Iraq and Syria, has spearheaded a lightning jihadist offensive that has already captured swathes of territory north and west of the capital.

ISIL waded in to Syria's civil war in the spring of last year on the side of rebels seeking to oust President Bashar Assad, but its systematic abuses and quest for hegemony quickly turned Syrian rebels, including Islamists, against it.

As a result, fighting broke out in January between ISIL and Syrian rebels, which eventually drew Al-Nusra in against its fellow jihadist organization.

Despite the fighting, which has killed hundreds, activists say the offensive in Iraq has empowered the group, partly because its fighters have captured large amounts of heavy weaponry from fleeing Iraqi troops.

"They are rivals, but both groups are jihadist and extremists. This move will create tension now with other rebel groups, including Islamists, in the area," said Abdel Rahman.

An ISIL jihadist confirmed the reports on Twitter, posting a photo showing an Egyptian Al-Nusra Front commander shaking hands with an ISIL leader of Chechen origin.

An opposition activist in Albu Kamal told AFP via the Internet that "there is a lot of tension, and the situation is only going to get worse."

Using a pseudonym for security reasons, Hadi Salameh also said the merger would "cause a big problem with the local tribes, who will not welcome this change."

Another activist said the move comes days after local rebel brigades who had been working with Al-Nusra signed a declaration demanding that it take a clear stance against ISIL.

"The loyalty oath (to ISIL) comes after tension between Al-Nusra and the local rebels," said Abdel Salam al-Hussein.

He also said hundreds of thousands of people, including displaced families from neighboring Iraq as well as flashpoint areas in Syria, are living in Albu Kamal, and that it would be a "catastrophe" if fighting broke out in the town.

Hussein said: "ISIL fighters are now positioned at the entrance of Albu Kamal, on the Iraqi side."

Rebels fighting ISIL and the Assad regime distributed amateur video footage of a rebel parade in Albu Kamal, which Abu Leyla described as a warning to the jihadists positioned just across the border.

Abu Leyla complained that "the FSA has received no external support at all, even though we are fighting ISIL."

Separately Wednesday, the Syrian air force raided ISIL-controled Raqa in the north of the country and Muhassen in the east.

In Raqa, "12 civilians, including a woman and a child, were killed in the air strikes. Not one strike directly hit an ISIL position."

The Assad regime has rarely targeted ISIL-held areas, except in recent days after the group and other Sunni militants launched an offensive in Iraq, wresting control of Mosul and other pars of Iraq.

A Syrian government newspaper reiterated frequent regime claims that the United States and Israel are behind the rising violence, and that they are vying to "divide Syria along sectarian and religious lines."

Qaeda, isis, nousra different names for the same face and this face is
takfiry wahaby extremist muslems
the only way to deal with these terrorists is to nuke the countries that fund them

josh what about the USA fighting alongside the maliki forces against isil and Qaeda does you blessing include the us or no ??????

jerry, before you accuse flamethrower of supporting assad please make sure you "quote" him:)) contexts change and situations change but flamethrower never changes. Here 24/7 always offering his nonsense.!

al Qaeda and isil are terrorists takfiry groups according to USA , FRANCE ,UK, ....and all the free world
anyone who support or condon these terrorists groups is a terrorist takfiry himself

FT the answer to your stupid question lies in education... just educate yourself on the complexity rather than on your binary drone minded idiocy... you ll find the answers to the question you refuse to know the answer to because it would shatter down all your M8 convictions...
ignorant fool you are indeed....

education indeed you need to understand what is going on other than on your M8 media...

and let me say = "of course it is safe to say that you are running out of arguments, which explains how every post of yours is more retarded and foul mouthed than the previous one"

see how wonderfully it applies to you? how you should learn things that you are the first one to do but get angry when others imitate you? poor thing... you really need to get a shrink....

Let the Sunnis have their caliphate in hell.

Why did Ali (ra) have a caliphate though? Don't insult Ali (ra) by criticizing his choices just because you are angry at one group. I thought shias were supposed to love Ali (ra).

So much for FSA-Al Qaeda being "secular" and "moderate" LOL.

these qaida guys are the moderate rebels we hear of ever so often in the media - they have joined the 'hardline' rebels now.

Why are you calling them ISIL and Qaida while Dr. Arreet 7akeh, the biggest phoney and most shameless arreet 7akeh manno 3eref kou3o men bou3o, calls them revolutionaries and refuses that they be called terrorists? Nawfal Daou, the head of this dung outlet, deserves to be punished by the Doc of Bull for allowing such a headline to be published on his toilet paper.

I do believe all of the concepts you have presented for your post.

They are very convincing and will certainly work.
Nonetheless, the posts are very quick for newbies.
Could you please prolong them a little from next time?