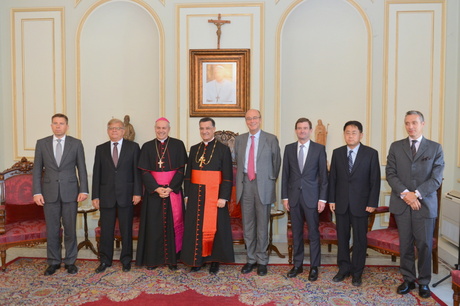 Maronite Patriarch Beshara al-Rahi on Wednesday held a meeting in Bkirki with U.N. Special Coordinator for Lebanon Derek Plumbly and the ambassadors of the five permanent members of the U.N. Security Council.

The meeting was held following an invitation from the patriarch.

“The Patriarch underlined to us his concern about the continuing inability of Parliament to elect a President and the resultant vacancy in the office of the Presidency. We share that concern,” the envoys said in a statement recited by Plumbly after the meeting.

“The process of selecting a new President must remain a Lebanese one. But Lebanon’s friends in the international community have a strong interest in its completion successfully, and as soon as possible,” added the statement.

“At a time of conflict and instability in other parts of the region, and when Lebanon itself faces multiple economic, humanitarian and security challenges, a prolonged vacuum in the highest office of the Lebanese state would indeed be a matter of grave concern,” the envoys warned.

They called on Lebanon’s leaders and members of parliament to “engage intensively to ensure the election of a President without further delay.”

“Lebanon’s long standing democratic tradition and the challenges the country presently faces mean that this is indeed a matter of great importance to us all,” the statement said.

Over the past two months the parliament convened seven times to try to elect a successor to Suleiman but failed during the last six sessions due to a lack of quorum caused by a boycott by most of the March 8 forces.

who care about electing the maronite president or who's deliberately impeding his election by not attending the vote unless everyone votes for him, all eyes are now on the al qaeda terrorist bombs.. can anyone remind us what was michel samaha sent by bashar to do and who he was already blaming for what he was about to do?