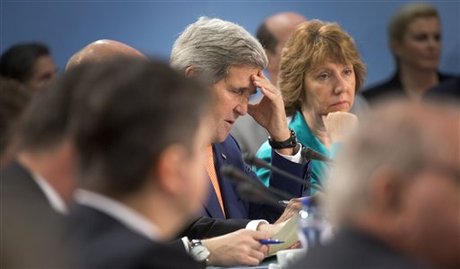 The United States warned Russia on Thursday it had only "hours" to prove it was helping disarm Ukrainian insurgents whose separatist drive has reopened a Cold War-style chasm in East-West ties.

U.S. Secretary of State John Kerry's warning came a day before Ukraine's President Petro Poroshenko signs the final chapters of an historic EU accord that nudges his country toward eventual membership and pulls it firmly out of Russia's reach.

Poroshenko also intends to get German Chancellor Angela Merkel and French President Francois Hollande to join him for a second round of telephone diplomacy with Russian President Vladimir Putin in two days.

Putin came under intense pressure from both European leaders and U.S. President Barack Obama on Wednesday to rein in separatist fighters over whom he denies exerting control.

Obama said sweeping economic sanctions were imminent unless the Kremlin stopped "the flow of weapons and militants across the border".

Kerry was even more explicit in Paris on Thursday following talks with French counterpart Laurent Fabius.

"We are in full agreement that it is critical for Russia to show in the next hours, literally, that they're moving to help disarm the separatists, to encourage them to disarm, to call on them to lay down their weapons and to begin to become part of a legitimate process," Kerry said.

The State Department added that sanctions would be also discussed by EU leaders on Friday when they sign the full Association Agreement with Ukraine that was ditched by the ousted pro-Russian president in November and now lies at the heart of the raging crisis.

The punitive steps under deliberation would target Russia's financial and defense sectors at a time when its export-dependent economy is on the verge of slipping into another recession.

U.S. media reports said one particularly painful step under consideration would prohibit the export of technology that could help Russia explore for oil and gas in the Arctic -- a major ambition of powerful state-held energy firms.

But 11 weeks of fighting that has already claimed more than 435 lives and brought factories in Ukraine's economically vital eastern rustbelt to a virtual standstill continued on Thursday despite the ceasefire agreement.

A spokesman for Ukraine's "anti-terrorist operation" said 10 paratroopers were wounded in rebel attacks on government roadblocks on Wednesday.

Poroshenko's one-week unilateral ceasefire order last Friday was picked up by senior separatist leaders on Monday in a seeming breakthrough in a conflict that has left some cities in ruins and displaced tens of thousands.

Putin has urged Kiev to extend the truce to give more time to peace negotiations that the warring sides began on Monday and were due to continue on Thursday.

Washington views such a system as more efficient. But it also hopes that it may appease local leaders and Russian-speaking voters enough to suspend their sovereignty drive.

Russia counters that only an outright switch to a federal system in which regions can adopt their own foreign trade policies could work in country as culturally splintered as Ukraine.

Poroshenko was due to submit to parliament on Thursday constitutional changes that stop well short of meeting the Kremlin's demands.

His proposal would enshrine in the constitution the use of Russian in independence-minded regions such as Donetsk and Lugansk.

Poroshenko said he was also willing to let local legislatures nominate regional governors instead of having them named directly by the president.

But analysts at the Eurasia Group political risk consultancy said there remained "an unbridgeable gap" between what Russia wanted and what Poroshenko was willing to cede.

"Moscow is seeking a structural guarantee that, via its influence over Ukraine's south and east, the Ukrainian government will be unable to move a unified Ukraine deeper into European political, economic and, above all, security structures," the Eurasia Group said in a report.

"Ceding this level of autonomy to regions is impossible for President Poroshenko, who must demonstrate to his own constituents that... while relations with Russia are critical, capitulation to Kremlin pressure is not acceptable," it stressed.

Have these "hours" passed already? Let us know just in case we feel nothing.