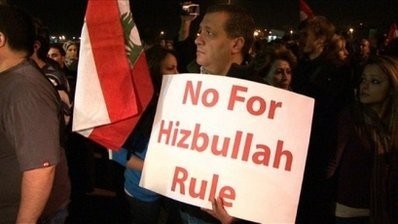 The bill contains a provision that target countries that refuse to cripple Hizbullah's fundraising, money laundering and global logistics networks.

The bill urges President Barack Obama administration's to clamp down on financial institutions, primarily in Lebanon and Europe, that knowingly engage with Hizbullah and its enablers.

It also targets Hizbullah's al-Manar television by requiring the U.S. administration to list and penalize any satellite provider that still carries the television channel.

The U.S. considers Hizbullah a terror group and accuses Syria and Iran of arming it.

The bill requires Obama to determine whether Hizbullah “meets the criteria of a transnational criminal organization.”

It also said that the Treasury Department has 120 days to ban any U.S. accounts or impose strict conditions on “the accounts of any foreign financial institutions, including central banks, that knowingly facilitate the activities of Hizbullah.”

The resolution also gives Obama a 30-day ultimatum to determine whether Hizbullah is considered a significant narcotics trafficker or a transnational criminal organization.

In 2013, Obama renewed a “national emergency” which imposes a freeze on assets of people linked to Hizbullah, stressing that they still “undermine Lebanon's stability.”

In August 2007, President George W. Bush ordered a freeze on U.S. assets of anyone Washington deems to be undermining the Lebanese government.

I'm glad the world knows that Hizballa is a mirror image of Qaeda. for those who are not aware, hizballa fighters do fight because they want to go to heaven too and they too have their emir (syed) which decisions should be obeyed by god. they too believe that eliminating anyone is right to achieve their goals, and when/if needed you will see young HA thugs quitting street mugging to blowing themselves up in hotels and where needed. by order of the syed, cause they are all "fida sirmaiyit el syed"

these baby killers start to be strangled: good.

According to this article The American Israeli Public Action Committee pushed for this resolution.
This lobbying group is a Likud instrument. They are extremists too.
Furthermore they want to shut down a TV station, how democratic it is from the US.
Hezbollah will not be harmed by this resolution, but potentially the Lebanese banking sector would.
I am against Hezbollah politically but AIPAC is no friend of Lebanon nor a friend of the US.
AIPAC has done more harm to US interests than George W Bush and co. But I guess if I was a US senator or congressman I lose nothing in doing favours to some far away country in a barbaric neighbourhood, if it gets me votes and campaign contributions.