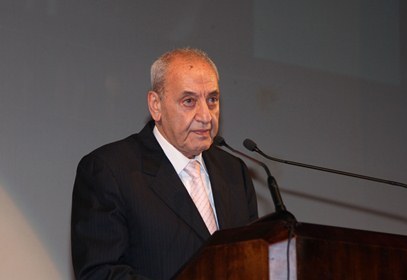 Speaker Nabih Berri has reiterated the need to provide military assistance to Lebanon to confront terrorists and stressed the importance of protecting the role of the legislative and executive branches.

“Every time I meet Arab or Western ambassadors … I tell them we need assistance, and financial and military support,” Berri said in remarks published in local dailies on Friday.

“We don't have a choice but to back the army and the security agencies,” he told officials who visited him on Thursday.

“I will say it out loud that terrorists would not be able to carry out any attack if these institutions are strong,” the visitors quoted him as saying.

Berri described Lebanon as a “graveyard for extremists” and blamed the country's problems on politicians like him and not the Lebanese people.

“Despite all what's happening, Lebanon is better off than the region's countries,” he said, adding “that's why we should focus on security.”

Berri reiterated that he was keen to hold the presidential elections although there was no sign that the parliamentary session he set for July 2 would be successful.

Rival MPs have so far failed in several rounds of electoral sessions to choose a successor to President Michel Suleiman whose six-year term expired on May 25.

Berri also discussed with his visitors about the executive powers granted to the government in the absence of a president.

He lauded the performance of Prime Minister Tammam Salam and backed an agreement reached among cabinet members for all government decisions to be based on consensus.

Berri stressed in his remarks that parliament and the cabinet should be able to function without paralysis.

“If a person's leg is broken, does it make sense to break the other leg?” he asked.

“We should treat the broken leg instead,” he said.

“The activation of the government's work should be accompanied by the parliament's ability to carry out its legislative and monitoring role,” the speaker added.

Berri has repeatedly expressed dismay at the boycott of parliamentary sessions aimed at electing a president and discussing the controversial wage-hike draft-law.

the days of shia hegemony are coming to an end.
you cannot be baby killers and oppress your countrymen and remain unharmed.

May i coment only for the sake of being fair..
Shia as majority of lebanese are patriotic and it is truely my opinion, but while living in a area governed entirely by hezbos, being assisted by hezbos for medical help, education.., being told all day long that u are targeted by sunni (they managed to make them believe that hariri was takfiri while hchem minkara and saiid chaaban who yried to implement islamic charia in tripoli/mina were secular and democrate...) u cannot blame shia and especialy after that hachem selman was shot deade in the middle of the day in bey without anyone interfering, sayed el amine being attacked and forced to leave south lebanon..
The problem is not shia comunity but hezbollah (even beri is not such a deal, he is busy in buying beyrouth building via his wife randa, interesting to see what she owns..)

Josh again the brigades fighting in irak, yemen, syria.. Are regional hezbollah brother parties, financed by iran to get over the old balance of power in the region, again armed terrorist group (yes terorists bc they take over the people's will and political aspiraation by force)
U know josh it's like saying look at the attricities donne by christians in central africa (they can give lessons to da3ech, so are christian terrorist fanatics?...
And again hezbos/assad are building all their rethoric on the idea they are protecting minorities, while in fact the are using these minoritites, by terrorisim them sometimes; hachem selman got shot in daylight in front of our armed forces, in front of camera and yet not even an investigation was lunched, i think true shia are living this even worse than we are....
Anyway again that's just my opinion...

imagine: in a way you are correct.
generally speaking, all extremist are a threat to their environment first where they indoctrinate their people by force.
but that does not absolve ordinary shia for not seeing through these extremists.

The real threat is hezbollah not shia and the only way that hezbos have to try to legitimate itself is buy putting all the shia as a targeted comunity so they will need its protection, like assad is doing..
Please geha don't fall in the trap... The real problem in lebanono is hezbollah (not forgetting coruption of the others but hezbos remains the main cause of lebanese problem for years, not shia but hezbos..
This being said, i'll go have some chupachups...

geha, we are better than saying shiaa, some are truly civil, modern, and are not "fida sirmayet el syed haseen".
and we hope the vast majority of this abducted sect by the Iranian foreign policy strategists, realize one day that they, too, can become modern citizens that believe in institutions and laws and that life is about building for the future and not about avenging a 1,500 year old incident.

lately, and unfortunately, the voice of moderate shia is not heard. as well ,most shia defend this hizbushaitan as being the sole representative of the shia community.
I do have many shia friends, but lately... and sadly... they are identifying themselves as belonging to this terrorist group!