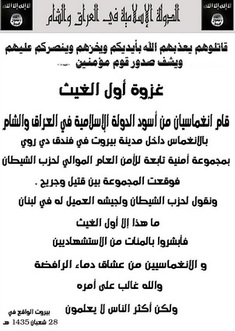 A previously unknown jihadist group linked to the Islamic State of Iraq and the Levant (ISIL) has claimed responsibility for the Duroy Hotel suicide attack in Beirut.

The group calling itself the state of Damascus-Qalamoun said via twitter on Thursday that two ISIL members targeted General Security agents at the hotel in Raouche.

It also vowed to carry out more attacks against Hizbullah and its agents, saying Wednesday's bombing was just the start.

The Saudi suicide bomber blew himself up at the hotel when he detonated his explosives during a security raid. His accomplice, also a Saudi citizen, survived the blast and is being questioned at hospital.

Wednesday's attack was the third suicide bombing in Lebanon in less than a week.

When you have a cancer such as Hezbollah, it will metastase into the entire social fabric and spur off other cancers.

Put an end to weapons and eradicate those who refuse to drop them !

divide to conquer..no one must win until they dissolve each other...beautiful plan to finish up all extremists then to divide the region..a plan very well implemented

Sunnis are the cancer of the world.

they might be, but in Lebanon you and your sect are.

blablabla and ft : will u stop lying during holy ramadan or is it halal in ur religion to lie ? Do u teach ur kids as well to lie shamelessly ? Do they learn quickly ?

This claims seems fake. It says: "bayna katil wa jari7". One would expect a claim to say: "shahid" not "katil"

5 of February in achrafieh I quote geagea :1these are our friends do not touch them
2falyahkom el ekhwan another one
3 out of prison deal made he gets out and the dinnieh terrorists army killers out also ......

Lebanon is once again missing out on an economic windfall a scheme that will appeal and attract a peculiar type of tourist untapped till now, the suicide bomber. We should build suicide bomber parks where suicide bombers from all over the world and many nationalities will come to exercise their common love and fantasy, the hobby of suicide bombing. We can set these suicide bomber parks all over the country thus helping the economies of the regions as well. And folks the beauty of this all is that it's a tourist season that can last the full year instead of just summer the summer and the holidays.

I suggest offering an all inclusive package I call "the suicide tour". It consists of a one way ticket to RHIA and a week stay at one of our finest hotels. You will then be collected in buses, with your choice of Shiite, Sunni, Christian or Hebrew markings and drive you to you selected suicide park. You enter the parks into a Sauna where you will stay for a while until you're hot and dehydrated. You then exit the Sauna into a beautiful air conditioned salon where classical music is playing and cold refreshing grape flavored Kool Aid is served. Once you drink the Kool Aid you will be directed into one of two gated movie sets depicting a city block festooned with crash test dummies dressed as citizens. One movie set will have a tastefully made of cast iron cartoon of Oussama Bin Laden above the entrance gate the other movie set Ayatollah Khomeini. You will enter through your preferred gate and follow the instruction provided and fulfill your "fantasy mission". The END, literately..

oh! a group nobody heard of before.... how convenient