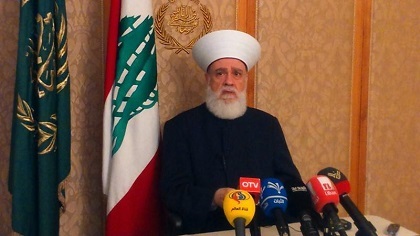 This "is an unnatural phenomenon, which should be stopped,” Qabbani said in his Ramadan message.

“Some parties are imposing vacuum and consolidating its presence in our lives,” he warned, saying the citizens are paying the price of the crises gripping the country.

“The vacuum is opening the door to security and political chaos … We won't find solutions to the security situation in the absence of a president,” he said.

The country's top Christian post has been vacant since the expiry of President Michel Suleiman's six-year term on May 25.

The vacuum is the result of differences between the rival March 8 and 14 camps on a compromise candidate.

The Mufti slammed what he called “hatred” among the Lebanese. He also urged unity among Muslims and Christians, saying they should find common ground to confront strife.

In his Ramadan message, Qabbani called for “holding elections in all religious and civilian institutions.”

He said he exerted all efforts to prevent strife among Muslims during his tenure, which ends in September.

He urged Sunnis to unite and elect a new Mufti.

The Mufti later held elections for the Council, which were deemed illegal.

Earlier this month, the Council led by the Mufti and the one formed by his rival deputy Omar Misqawi called for the election of a Mufti before the expiry of Qabbani's term on Sept. 15.