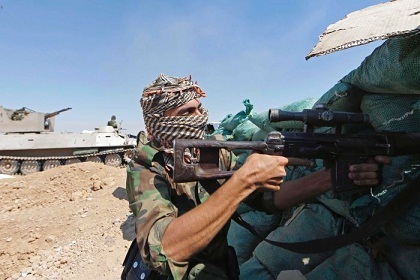 Iraqi forces fought for a strategically located university campus outside Tikrit Friday and bombarded the city in an effort to retake it from Sunni Arab insurgents.

The military operation came after Prime Minister Nuri al-Maliki conceded that political measures will also be needed to defeat the jihadist-led offensive that has killed nearly 1,100 people overrun major parts of five provinces.

In further fallout from the crisis, the president of Iraq's autonomous Kurdish region declared there was no going back on Kurdish self-rule in disputed territory, including ethnically divided northern oil city Kirkuk, now defended against the militants by Kurdish fighters.

Iraqi forces swooped into Tikrit University by helicopter on Thursday, and a police major said that there were periodic clashes between insurgents and security forces on the campus on Friday.

A senior army officer said that Iraqi forces were carrying out a major wave of air strikes against militants in Tikrit to protect the forces at the university and prepare for an assault on the city.

Iraqi troops are deployed in areas around the city for the assault, the officer said.

Another senior officer said taking the university is an important step in regaining control of Tikrit, the hometown of executed dictator Saddam Hussein, which was seized by Sunni Arab militants on June 11.

Iraqi Kurdish leader Massud Barzani said Baghdad could no longer object to Kurdish self-rule in Kirkuk and other towns from which federal forces pulled out in the face of the insurgent advance.

Iraq's flagging security forces were swept aside by the initial insurgent push, pulling out of a swathe of ethnically divided areas, including the northern oil hub of Kirkuk.

Despite Barzani's declaration, it is likely that the territory row will continue to haunt Iraq for years to come.

On Thursday, Maliki, who has publicly focused on a military response to the crisis, said political measures were also necessary, ahead of the July 1 opening of the new parliament elected in an April 30 poll.

In an interview with the BBC, meanwhile, Maliki said the Syrian air force had carried out strikes against militants on the Syrian side of the Al-Qaim border crossing, which is controlled by the jihadist Islamic State of Iraq and the Levant (ISIL).

Maliki said Baghdad had not requested the Syrian strikes, but he "welcomed" any such move against the ISIL-led militants.

Iraq has appealed for U.S. air strikes against the militants, but Washington has only offered up to 300 military advisers, the first of whom have begun work in Baghdad.

The authorities have also purchased at least eight fighter jets from Russia, and six more that are currently stored in Belarus, in a deal valued by Vedomosti newspaper at up to $500 million.

Washington has urged Iraq's fractious leaders to unite in the face of the militants, and Hague echoed that message Thursday, saying the "urgent priority must be to form an inclusive government."

Washington has stopped short of calling for Maliki to go, but has left little doubt it feels he has squandered the opportunity to rebuild Iraq since American troops withdrew in 2011.

Maliki's security spokesman has said hundreds of soldiers have been killed since the offensive began, while the U.N. puts the overall number of people killed at nearly 1,100.

Without Saddam, Iraq is nothing no matter what other would say!