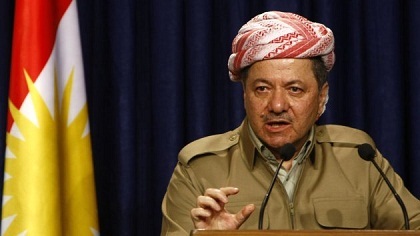 Iraqi Kurdish leader Massud Barzani said Friday there was no going back on autonomous Kurdish rule in oil city Kirkuk and other towns now defended against Sunni militants by Kurdish fighters.

Kurdish forces stepped in when federal government forces withdrew in the face of a jihadist-led offensive earlier this month.

Speaking at a joint news conference with visiting British Foreign Secretary William Hague, Barzani said: "We have been patient for 10 years with the federal government to solve the problems of these (disputed) areas.

"There were Iraqi forces in these areas, and then there was a security vacuum, and (Kurdish) peshmerga forces went to fill this vacuum."

The swathe of territory in question stretches from Iraq's border with Iran to its frontier with Syria, and is one of several long-running rows between Baghdad and Kurdish authorities in Arbil.

The disputes have been cited by analysts and diplomats as among the biggest long-term threats to Iraq's stability.