Humanitarian Corridors Needed to Reach Many Displaced in Iraq 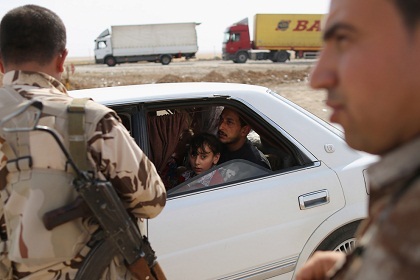 The International Organization for Migration warned Friday that aid workers could not reach tens of thousands of Iraqis displaced by the violence rocking the country, urging the establishment of humanitarian corridors to access those in need.

"The only way to respond (to the needs of the displaced) is to create humanitarian corridors," IOM spokeswoman Christiane Berthiaume told reporters in Geneva.

The migration body said it, along with the U.N.'s World Food Program and children's agency UNICEF, had been able to distribute relief to around 10,000 people in Iraq this month.

"But that is a drop in the bucket when you consider the tens of thousands of people who have been displaced by the ongoing fighting in Mosul, Tal Afar, Tikrit and on the road south to Baghdad," IOM Baghdad Emergency Coordinator Mandie Alexander said in a statement.

Militants from the Islamic State of Iraq and Levant (ISIL) have captured a swathe of territory in northern Iraq in a lightning assault which is threatening to tear the country apart.

The onslaught has killed nearly 1,100 people.

People fleeing the violence in the north are now dispersed in 17 of the country's 18 governorates and many were beyond the reach of aid workers, IOM said.

"We cannot accurately assess their needs or deliver aid to the vast majority because of the lack of security and hundreds of road blocks," Alexander explained, adding that the road blocks also stopped people in need from getting to places where they could receive aid.

Alexander warned the recent onslaught had radically altered the situation in Iraq.

"Iraq is no longer the country that we knew and the Iraq we knew will never exist again," she said, lamenting that "we have turned back the clock to the emergencies of 2003 and 2006 and what we now have is a very complex humanitarian emergency with huge obstacles to overcome."

IOM, which counts a total of 250 international and national staff in Iraq, said it had been able to locate and identify the needs of 240,000 displaced people in 240 different locations across the country.

The U.N. this week tripled its appeal for humanitarian funding for Iraq to more than $312 million.

Up to 10,000 people have fled a mostly Christian town in northern Iraq after it was shelled with mortars, former residents and the U.N.'s refugee agency said on Friday.

Residents of Qara Qosh, east of the militant-held city of Mosul in Nineveh province, left in a rush and had little time to take their possessions, with most fleeing to the Kurdish regional capital Arbil, the UNHCR said.

"Up to 10,000 people from the predominantly Christian communities of Qara Qosh have fled their homes after mortar rounds landed near their ancient town earlier this week," the U.N. agency said on its website.

"The latest influx will place further pressure on resources there, particularly housing and fuel supplies."

The autonomous Kurdish region in northern Iraq has already seen an influx of people fleeing a Sunni militant offensive, led by jihadists from ISIL, that has swept parts of the country.

Those who fled Qara Qosh had no access to showers or air conditioning, worsening already difficult conditions in Iraq's scorching summer heat, the UNHCR said, adding many were concerned about a lack of medical care.

The UNHCR and fleeing residents interviewed by AFP said heavy shelling of Qara Qosh and the surrounding area of Hamdaniyah from neighboring villages had forced them to leave.

It was not immediately clear who carried out the mortar shelling.

"Our children did not sleep for two days because they were afraid from the shelling," said Azaar Behnam, who was sitting near her five children in a youth centre in Arbil where those who fled were being sheltered.

"We escaped and left everything behind because the sound was really terrible, and life became impossible."

Other residents of the Hamdaniyah area interviewed by AFP gave similar accounts.

"The weather was very hot, we were suffering, and there was no electricity or water," said Taala Ishaq, a 65-year-old who fled with 24 relatives, including 18 grandchildren.

"We left the city because we were afraid for our children."

The population of Qara Qosh is mostly Syriac Catholic, and security forces in the town have long been drawn from local Christians.

A Christian militia also reports to the police and provides security for churches and church property.

Iraq's Christian community is a shadow of what it once was -- it once numbered more than a million, but now there are fewer than 400,000 Christians left across the country.