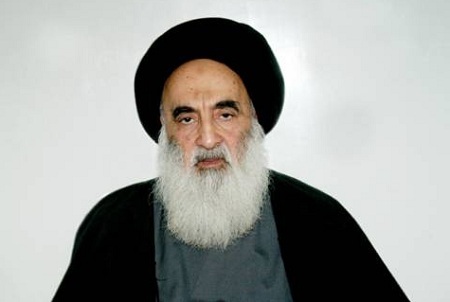 Iraq's top Shiite cleric on Friday urged the country's fractious political leaders to unite and form a government to help see off advances by Sunni militants who have overrun swathes of territory.

Grand Ayatollah Ali al-Sistani, who is revered within the Shiite majority and whose stature dwarfs that of any politician, also insisted that divisions were not an option, with militants holding parts of five provinces and Kurdish authorities exerting greater control over areas adjacent to their autonomous region.

"What is requested from political blocs is to agree on the three presidencies during the days allotted... in accordance with the constitutional timeline," Sistani's spokesman Abdul Mehdi Karbalai said during a Friday prayer sermon in the Shiite shrine city of Karbala.

"That is the beginning of the political solution that everyone is looking for," he said speaking on behalf of Sistani.

He was referring to the president of the republic, the prime minister and the speaker of parliament, posts which in past governments have been agreed as part of an encompassing package deal.

International leaders, including U.S. President Barack Obama, have also called on Iraqi politicians to unite and swiftly agree to a government after April 30 elections.

But with parliament due to convene on July 1, little progress appears to have been made in choosing the three key posts.

Following previous elections, the president has typically been a Kurd, while a Shiite Arab has been prime minister and a Sunni Arab has been the speaker of parliament.

"No one should think of division as a solution to the current crisis," said Karbalai.

"The solution that preserves the unity of Iraq and the rights of all its components according to the constitution is already there, and can be agreed on if the intentions are good from all sides."

Militants led by the jihadist Islamic State of Iraq and the Levant began a lightning offensive late on June 9, capturing major cities and parts of five provinces north and west of Baghdad.

Though they initially wilted when faced with the onslaught, Iraq's security forces appear to be performing better of late, though insurgents have made advances in parts of the country.

shia militias cleansing sunnis since 2003, sistani was then silence.
Now that Maliki and Iran are threatened, he makes a fatwa...