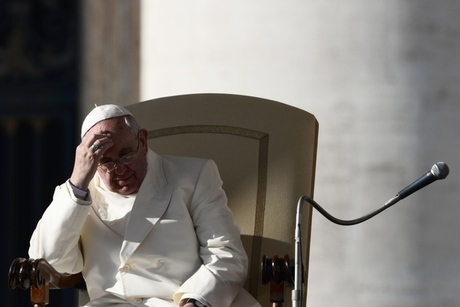 Pope Francis canceled a visit to a Roman hospital at the last minute on Friday after "a sudden indisposition," the Vatican said, without providing any details.

"Following a sudden indisposition, the Holy Father will not be going this afternoon to the Gemelli hospital," it said in a statement, adding that a cardinal would take his place.

It is not the first time the hardworking 77-year-old pontiff has canceled programmed events at the last minute.

"I cannot say whether the pontiff is suffering from tiredness or indigestion," Vatican spokesman Federico Lombardi told Agence France Presse.

"With so many undertakings, it's clear there's a need for a break every now and then," he said, describing "the intense pace" of the Argentine's schedule.

The usually energetic pope gets up at five o'clock every morning and goes to bed early after a long day of religious and diplomatic engagements.

He is such a good Pope. I hope he is fit and well very soon
he is in our prayers