'Worst is Over' in Iraq, ex-General in U.S.-Led Invasion Says 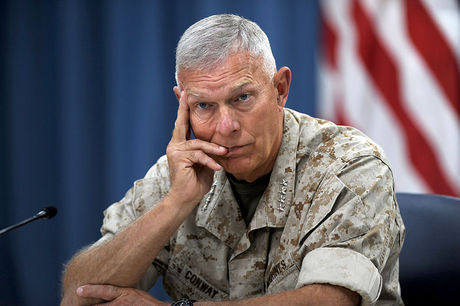 The worst of the insurgency in Iraq is "over", a former general who commanded U.S. Marines and British forces in the 2003 U.S.-led invasion said Friday, in a rare note of optimism over the crisis.

Speaking on the sidelines of the annual conference of Iran's exiled opposition -- in which he was a guest speaker -- General James Conway said the insurgents who have overrun major parts of Iraq were unlikely to make any further significant gains.

The lightning offensive this month by jihadists from the Islamic State of Iraq and the Levant (ISIL) and other militant groups has killed more than 1,000 people and displaced tens of thousands.

Until now, ISIL has primarily made inroads in Sunni Arab areas in the north of Iraq, supported by Sunni militants that loathe current Shiite Prime Minister Nouri al-Maliki.

"The worst is over," Conway said.

"The ISIS (as ISIL is often also called) are probably surprised themselves with their degree of success."

But "they will not mess with the Kurds, they will not be able to take Baghdad and they can't go into the south where the oil fields are because it's all Shiite territory."

The Kurds already have their own autonomous region in the north and have defended key towns outside this area against the militants after federal forces withdrew.

Conway said that the Kurds may take advantage of the current situation and "establish once and for all a separate Kurdistan."

Already, Kurdish fighters have been defending the ethnically divided northern oil city of Kirkuk from militants, and the president of Iraq's autonomous Kurdish region declared Friday that there would be no going back on Kurdish self-rule in this locality.

Conway said he also feared that Sunni militants who have been supporting ISIL so far would start pulling away.

"It's only been a marriage of convenience... There's going to be some fighting between them and the Sunnis."

Meanwhile, Maryam Rajavi, the leader of the National Council of Resistance of Iran -- a coalition of Iranian opposition groups -- called for Maliki, who is close to the Iranian regime, to go.

Washington itself has stopped short of calling for him to step down, but has left little doubt it feels he has squandered the opportunity to rebuild Iraq since American troops withdrew in 2011.