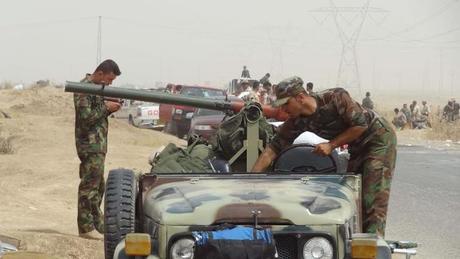 The onslaught by Sunni Arab militants in northern Iraq has prompted the country's Kurds to deploy the famed peshmerga security forces in defense of their autonomous region.

The move affects both young and old, with regional President Massud Barzani even calling on retired fighters to volunteer to take up arms again.

At a peshmerga base outside Arbil, the capital of the three-province Kurdistan region, training has a new urgency.

Young men dressed in green fatigues are put through their paces on an assault course, swinging from monkey bars, shimmying down ropes and scrambling over walls daubed in camouflage colors.

They will graduate as the region faces what the secretary general of the ministry responsible for the peshmerga says is a major military challenge -- tackling the insurgents, led by jihadists from the Islamic State of Iraq and the Levant (ISIL), who have seized a large chunk of neighboring territory.

"Very nice neighbors we have now," he added sarcastically.

The peshmerga are famed for their devotion to the Kurdish nationalist cause and their long-running guerilla war against now-executed dictator Saddam Hussein's forces, and are regarded as well-trained, well-armed and capable.

The recruits go through a 45-day training program, which includes physical exercise like kickboxing and assault courses, as well as weapons instruction.

When they graduate, they will face foes with recent battle experience in Syria and Iraq, as well as some former Iraqi soldiers with several wars under their belts.

As they train, retired peshmerga responding to Barzani's call arrive at the base.

They trundle in, many dressed in traditional baggy Kurdish shirts and trousers, bound around often rotund midsections with a patterned belt.

Some 200 of them have answered the call in recent days, a peshmerga source says, swelling the 300 men in training.

"This is the biggest deployment of peshmerga in recent history," Yawar told AFP.

Previously, he said, some 13 brigades were deployed along with regular Iraqi soldiers along a 1,500-kilometre line from the Syrian border to the frontier with Iran.

But when Iraqi forces retreated in the face of a militant onslaught that has overrun areas of five provinces, the peshmerga moved in.

"When they left their bases, it created a void, and we had to send in extra forces to fill that void," Yawar said, declining to give exact figures for "security reasons".

Among those newly deployed is a 24-year-old from the Kurdish city of Sulaimaniyah, who is facing his first conflict.

He is on summer holidays from university, where he is studying at a military school to become an officer and is now on a front line outside the disputed city of Kirkuk, some five kilometers from the Sunni insurgents.

He declined to give his name, as rank-and-file peshmerga have been told not to speak to media, but was eager to practice his English.

"I have studied English, but never spoken it with a foreigner before," he said, hesitating before breaking into a smile.

He admits to some nerves about battle as he looks at the smoke rising from an exchange of mortar fire across the front line.

"I try not to be afraid, but I am sometimes. But I think it's bad if you aren't afraid at all," he said.

Elsewhere on the front line, another fighter rattled off an inventory of the equipment at their disposal.

"We have tanks (armored personnel carriers), mortars and good guns," he said, gesturing at the equipment arrayed alongside trenches and green sandbagged positions.

But he also acknowledged that the militants can match much of that, having taken arms and material left behind by the withdrawing Iraqi forces.

The peshmerga are deployed along areas that far exceed the previously accepted borders of the Kurdish region.

That includes the disputed oil hub of Kirkuk, a city Kurdistan has long hoped to control over objections from the Iraqi federal government.

On Friday, Barzani declared that there was no going back on Kurdish control of Kirkuk and other areas held by his troops.

"Now, this (issue)... is achieved," he said, referring to a constitutional article meant to address the Kurds' ambition to incorporate disputed territory.

Yawar said the current line of deployment would hold, ruling out the peshmerga either retreating to the old borders or advancing to seize territory from the militants.

"Our strategy at the moment is just to defend this line... to prevent any terrorists from entering the region," he said.

"And we are not going to be involved in any military operations beyond that line."