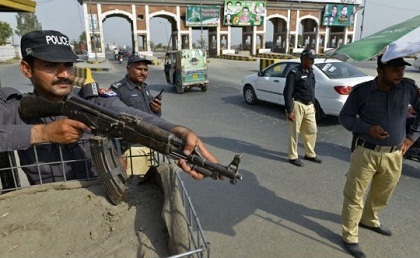 Pakistani jets and artillery bombarded militant hideouts in the country's restive northwest on Saturday as part of a massive ongoing offensive against the Taliban, killing 18 insurgents, the military said.

The statement said a Tehreek-e-Taliban Pakistan (TTP) commander was killed while a "prominent" al-Qaida commander was arrested while trying to flee.

Nearly 500,000 people have fled the offensive in North Waziristan which is aimed at wiping out longstanding militant strongholds in the area, which borders Afghanistan.

Tens of thousands of families have left for the town of Bannu, close to North Waziristan, while hundreds more have moved further afield to the towns of Lakki Marwat, Karak and Dera Ismail Khan since the offensive began in mid-June.

A full assault by ground troops has been expected for some days and the intensive shelling in several areas could indicate that it is now imminent.

Nearly 370 militants and 12 security personnel have been killed in the offensive, dubbed "Zarb-e-Azb" after a sword used in battle by the Prophet Mohammad, although the number and identity of the victims are impossible to verify.

Pakistan's armed forces have used jet fighters, tanks and artillery in the operation that began almost two weeks ago.

The assault on the militant bastion of North Waziristan, long urged by Washington, was finally launched after a dramatic attack on Karachi airport which killed dozens of people and marked the end of a faltering peace process with the Pakistani Taliban.

There was one piece of good news from Bannu on Saturday when a baby boy was born in a camp set up for those who have fled the offensive.

It was the first reported birth at the facility in Bakakhel where at least 250 people have taken refuge.