Russia Will Not Sit Idly By as Jihadists Press Iraq Assault 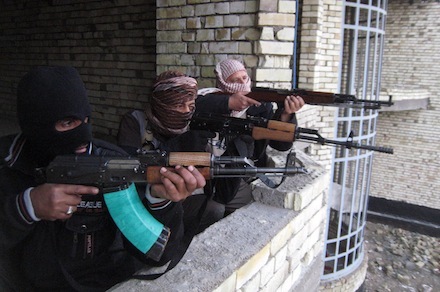 Russian Deputy Foreign Minister Sergei Ryabkov said in Damascus on Saturday that his country "will not remain passive" as jihadists push an offensive in Syria's neighbor Iraq.

"Russia will not remain passive to the attempts by some groups to spread terrorism in the region," Ryabkov told journalists after meeting with President Bashar Assad.

Sunni militants, led by the Islamic State of Iraq and the Levant (ISIL) which is active in both Syria and Iraq, have seized vast territory north and west of Baghdad since launching their offensive two weeks ago.

Ryabkov, whose country is Assad's main backer, did not elaborate on what steps Russia might take.

"The situation is very dangerous in Iraq and the foundations of the Iraqi state are under threat," he said.

Ryabkov also reiterated Moscow's position that the crises in Syria and Iraq must be resolved "through a genuine national dialogue".

Asked about Washington's decision to support moderate rebels in Syria, Ryabkov said: "There can be no alternative to a political solution."

He added: "We reject this US policy. It is in everybody's interest, including the Americans, to act responsibly on Syria."

President Barack Obama has asked US lawmakers to authorize a $500 million plan to arm and train the Syrian opposition, which has been fighting both Assad's troops and the jihadist ISIL.

Ryabkov said Damascus had taken a "responsible" decision in handing over its chemical weapons arsenal, while calling on Israel to "abide by" the Treaty on the Non-Proliferation of Nuclear Weapons.

Terrorists and their gimps that post on this site really hate Russia now. Run terrorists!