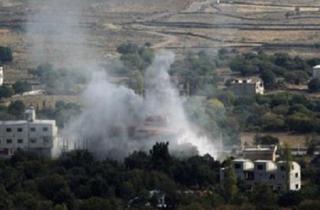 Two rockets fired from the Eastern Mountain Belt landed in the Bekaa town of Brital without causing any injuries, the military institution announced on Saturday evening.

“The rockets landed near the village's al-Hajjeh school,” the Army Command said in a communique, adding that no injuries were reported.

Following the rocket attack, army troops patrolled in the region.

The army also said that a military expert inspected the sites where the rockets landed.

One of the first two fell near the village's inhabited houses, and the second between the town of al-Khodr and Brital.

Meanwhile, the second two were fired a while later and they hit the outskirts of the Bekaa town, said the NNA.

All four rockets were fired from the Eastern Mountain Belt, according to the same source.

Since Hizbullah's intervention in the fighting in Syria, rockets from the Syrian side of the border have frequently landed mainly in the Bekaa's Hermel and in Brital.

Find the terrorists, torture them, hang them.

It saddens me every time a rocket, a shell, or even a rock falls on Brital. What did the honest hard working people of Brital do to deserve such an evil act? what? Is it because they have a keen interest in fancy cars? Is is because they forcibly host foreigners at their homes? or is it because they support the resistance? I am at a loss....

ice-man, I think you're being a bit emotional here:)))!

20 minutes ago Ayatollah Khamenei's office in Lebanon: Tomorrow is the first day of the holy month of Ramadan.

The lowest of gimps speaks