Jumblat Heads to Paris for Talks with Hollande 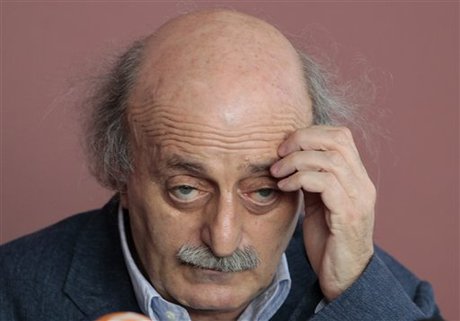 An Nahar newspaper reported Sunday morning that Jumblat had received an official invitation to visit France from Hollande.

The daily said that the meeting will tackle the latest developments in Lebanon and the ongoing presidential stalemate.

The PSP leader has repeatedly stressed that he will not endorse the nomination of Free Patriotic Movement leader MP Michel Aoun or Lebanese Forces chief Samir Geagea for presidency.

He also rejects withdrawing the candidacy of Helou “in favor of the Central Bank chief or Army Commander General Jean Qahwaji.”

The two officials stressed during their Paris meeting on the “necessity to strengthen joint action” to secure holding the pending constitutional junctures.

Suleiman left office on May 25 without a successor to lead the state in the coming six years, as differences between the March 14 and the March 8 alliances prevented the election of a new president.

The congregation of th terrorists. How paris as become the Mecca of terror, those who support and finance it.

james bond
right on dude. I can hardly picture him as the savior of Lebanon. he is nothing but a flip flopper a corrupt flip flopper

orio fistula
your comments are dull, irrelevant and annoying. I cannot imagine your IQ being higher than 1

Jumblatt sees the game and sees the opportunity to break Lebanon free of Hezbollah if the Aoun factor can be overcome. Geagea is willing to move to the side to get another candidate, but Aoun is hanging in like a rusty nail and refuses to go to Parliament with his deputies until an epiphany strikes the 128 Deputies and they all get the burst of insight that the man they have been looking for, lo these many years, is right in front of their eyes, the great Michel le petite generale Aoun!

lol. is that why aoun is not a candidate and geagea is? is that also why m14 refuses to propose someone else?