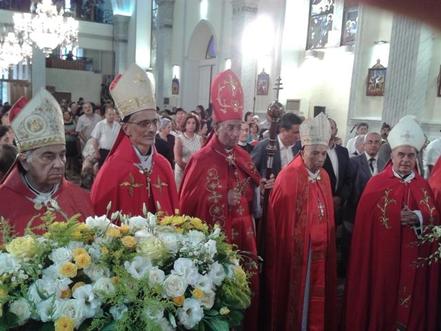 Maronite Patriarch Beshara al-Rahi considered on Sunday the behavior of lawmakers “disappointing,” wondering if the presidential vacuum is a “normal” matter that doesn't require their attention.

“MPs and those who are behind them are a disappointment for repeating the same behavior every time the parliament is called for voting for a new head of state,” al-Rahi said during Sunday's sermon at the church of Our Lady of Perpetual Help in the town of Hsoun in Jbeil.

He wondered if the presidential vacuum “is a normal matter that doesn't prompt any reaction by lawmakers of the civil society.”

Over the past two months the parliament convened seven times to try to elect a successor to former President Michel Suleiman but failed during the last six sessions due to a lack of quorum caused by a boycott by most of the March 8 forces.

The patriarch called for reconciliation between the Sunnis and Shiites, the March 8 and 14 coalitions, urging the political arch-foes to “rebuild unity amid the division.”

Al-Rahi considered that the “shameful” stage that the country reached requires the implementation of four main factors.

Raising children to recognize the importance of the higher national interest, respecting the constitutional institutions, maintaining the country's neutrality and fortifying the national pact and entity.

“We are in need for politicians that could be up to the challenges facing the country,” al-Rahi said.

I'm afraid it's too late Patriarch, now that THEY are in control what was old in new again

Patriarch should use the only hard power that he has in his arsenal, much as Pope Francis did with the Mafia in Sicily. He should excommunicate those Maronite Deputies who have put the country and the Maronite church at risk. Aoun and his deputies, excommunicated from the Maronite Church, become ineligible to serve as President of the Republic. If there was ever a time to do something with Aoun to move him out of the way, now is the time and this is the way.

What in the world are you talking about, two face bird?? Who's the angel? Who claimed to be an angel? Just because Aoun's uniquely a troublemaker doesn't mean that those who point that fact out must also harbor an equally obstinate fool. Parity in idiocy is not a propery of idiocy. Your fool is yours alone. Do not look for salvation or amelioration by seeking a fool of equal quality in the ranks of your adversaries. Aoun has no match in this regard.