LMFAO Prove They're More Than a Novelty Act 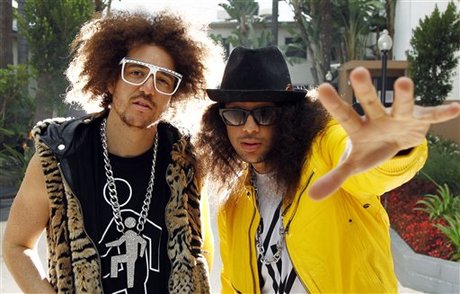 "I'm in Miami Trick" may have been a novelty hit, but LMFAO have proven that they are no novelty act.

The familial duo of Redfoo (Stefan Kendal Gordy) and Sky Blue (Skyler Austin Gordy), known for crazy outfits, wild hair and even wilder music, have proven their staying power three years after their initial hit, and have provided the song of the summer with "Party Rock Anthem."

Redfoo said he never had any doubt it would be a No.1 smash.

"It had so many components. It had the feeling, the vibe. It had the epic. It had the classic dance break. It is like, 'Everyone stop what you are doing — you have to move, right here.'"

LMFAO are further burnishing their club credentials with a tour with dance queen Ke$ha. But the pair — who come from music royalty — insist there is more to them than party music.

AP: What do you say to people who thought you would be a one-hit wonder?

Redfoo: It is a big deal just to keep on your path. That is the biggest thing. Luckily, we are dreamers and we believe that whatever we are thinking, we are going to bring about in our life, kind of like "The Secret." It has been really easy to stay focused. The haters want to hate. They want to talk about this and talk about that. We don't even acknowledge it.

AP: Do you feel like the reason your music is popular is because you tapped into something that wasn't being widely represented?

Redfoo: It was happening in the DJ world. DJ AM, the late, great (DJ).... was like, "I am starting a night, and I am going to play what I want to play. ... You stand in line. You get in. You can't pay the DJ to play. We are going to play what we want to play. Eighties, a little rock, house music." A lot of the DJs, including us, wanted to play that stuff. That is what we wanted to play. We were bored of the slower-tempo stuff. We wanted some fun stuff. ... (We) were like, "Let's do more of this, that electro thing." We could sing. We could rap, dance. You can do anything you want to do. See, when you are doing something new, there (are) no rules. We said, "Let's create a new thing, " then boom — party rock.

AP: So you promote this party lifestyle, but do yoga daily?

Sky Blu: I feel like we are professional athletes and our whole life, we have trained as athletes and had the dream to become professional in an athletic situation. So, martial arts and all that stuff, I have been doing since I was 3 years old. Now that we party all of the time and are doing all of this stuff, I felt like I had to take it back to the roots of the body and get the stretch on, so I do yoga and martial arts. I do my best to eat raw food as much as I can and then drink and do what I do because it balances it out.

AP: Your style of dress attracts a lot of attention. Do you feel that kind of attention stops people from taking you seriously as artists?

Sky Blu: I think how we dress represents the music and the nature of us. We are happy people and we are on this earth to make people happy. We dress accordingly to that. We dress fly, flashy, fun.

AP: You are both related to Motown Records founder Berry Gordy (Red Foo is his son, Sky Blu is his nephew). Has he been instrumental in guiding your careers?

Redfoo: Definitely. He has been where we are now with all his artists, with Diana (Ross), Smokey, (Robinson), Marvin (Gaye), The Jackson 5. He is saying, "OK. You need this or you need to get on these shows." Then will.i.am has been here, and he says, "You need to do 'Good Morning America.' You need to do this and that." They are from two different times and they are both saying these things, and so we have the best of both worlds.