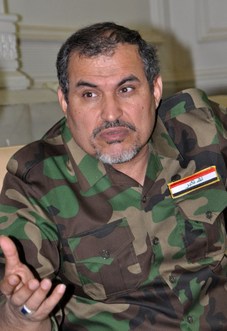 The militant onslaught that has overrun swathes of Iraq is even more dangerous than a brutal period of sectarian killings in which tens of thousands died, an official said Sunday.

Before, militant groups sparked a "sectarian war, but now (the) war is more organized" and the abilities of the militants are greater, Khuzaie said.

"ISIL wants to form a... state from provinces in Iraq and provinces in Syria," he said, referring to jihadist group the Islamic State of Iraq and the Levant, which has spearheaded the militant offensive that has overrun chunks of five provinces this month.

ISIL is also a major force in the rebellion against Syria's President Bashar Assad, and controls territory inside Iraq's neighbor to the west as well.

Though they are performing better now, Iraqi security forces wilted during the initial militant offensive, in some cases shedding uniforms and abandoning vehicles in their haste to flee.

The withdrawal of federal security forces allowed Iraqi Kurds to take control of a swathe of disputed northern areas that Baghdad has long opposed them adding to their autonomous three-province region.

Khuzaie had harsh words for the Kurds' actions during the crisis, saying that they "acted as ISIL acts (because) they want to obtain the disputed areas."

The sectarian policies of Malki are the root cause of the Iraqi crisis.