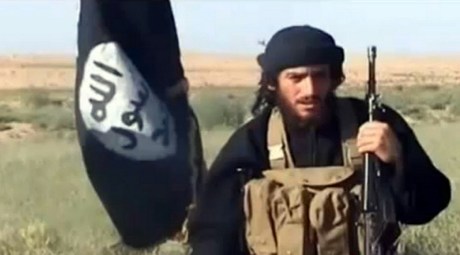 Ruthless jihadists spearheading a Sunni militant offensive in Iraq have declared an "Islamic caliphate" and ordered Muslims worldwide to pledge allegiance to their chief, in a spectacular bid to extend their authority.

The Islamic State of Iraq and the Levant renamed itself simply the Islamic State (IS) and declared its shadowy frontman the leader of the world's Muslims, in a clear challenge to Al-Qaida for control of the global jihadist movement.

Iraqi forces meanwhile pressed a counter-offensive Monday against executed dictator Saddam Hussein's hometown of Tikrit, one of a string of towns and cities overrun by IS-led fighters in a swift advance that left more than 1,000 people dead, displaced hundreds of thousands and piled pressure on Prime Minister Nuri al-Maliki.

Maliki's bid for a third term in office has been battered by the offensive and he is no longer seen as the clear frontrunner when parliament reopens on Tuesday following elections in April.

IS announced Sunday it was establishing a "caliphate" -- an Islamic form of government last seen under the Ottoman Empire -- extending now from Aleppo in northern Syria to Diyala province in eastern Iraq, the regions where it has fought against the regimes in power.

In an audio recording distributed online, the group declared its chief Abu Bakr al-Baghdadi "the caliph" and "leader for Muslims everywhere". Henceforth, the group said, he is to be known as "Caliph Ibrahim" -- a reference to his real name.

Though the move may not have immediate significant impact on the ground, it is an indicator of the group's confidence and marks a move against Al-Qaida -- from which it broke away -- in particular, analysts say.

The caliphate is "the biggest development in international jihad since September 11", said Charles Lister of the Brookings Institution in Doha, referring to the Al-Qaida attacks on the United States in 2001.

"It could mark the birth of a new era of transnational jihadism... and that poses a real danger to Al-Qaida and its leadership," he said, adding that IS, with members in many countries, is the richest jihadist group.

Baghdadi, thought to have been born in the Iraqi city of Samarra in 1971, is touted by the group as a battle-hardened tactician who fought American forces following the 2003 U.S.-led invasion, and is now widely seen as rivaling Al-Qaida chief Ayman al-Zawahiri as the world's most influential jihadist.

His group has drawn thousands of foreign fighters, attracted by a combination of Baghdadi's own appeal, IS's efforts to establish what it believes is an ideal Islamic state, and the group's sophisticated propaganda apparatus which publishes magazines and videos in English and a host of European languages.

The group is known for its brutality, summarily executing its opponents and this week crucifying rival Islamic rebels in Syria.

Since the Prophet Mohammed's death, a caliph was designated "the prince" or emir "of the believers".

After the first four caliphs who succeeded Mohammed, the caliphate lived its golden age in the Omayyad empire from the year 661 to 750, and then under the Abbasids, from 750 to 1517.

It was abolished when the Ottoman empire collapsed in 1924.

In Syria, IS fighters control large swathes of territory in Deir Ezzor near the Iraq border, Raqa in the north, as well as parts of neighboring Aleppo province.

In Iraq, it has spearheaded a lightning offensive since June 9, capturing sizable territories in the north and west of the conflict-torn country.

Iraqi forces initially wilted in the face of the onslaught but have mounted an ambitious counter-offensive to take back Tikrit, a battle which could be crucial tactically and for the morale of the security forces.

Officials said thousands of troops were advancing on Tikrit from a number of directions, while warplanes pounded the city with air strikes and clashes broke out in several areas around the city.

World leaders and religious clerics have meanwhile pushed Iraqi leaders to unite and quickly form a government, with parliament due to finally open on Tuesday, but despite the urgency, politicians have warned that the process of choose a new prime minister could take upwards of a month.

Though Maliki emerged from April 30 elections in pole position to retain his post, with his bloc winning by far the most seats albeit not a majority, his opponents have stepped up their criticism of him in the wake of the militant offensive.

Before, militant groups sparked a "sectarian war, but now (the) war is more organized" and the militants' abilities were greater.

What a beautiful day.

Anyone called "shiaslayer" is sick.

Are you quoting an Ayat lyric? ;)

I wonder how many countries will recognize them and honor their passports:)!

As usual, excellent contribution and opinion on the article by flamethrower. Situations change, contexts change but flamethrower never changes: Posting nonsense and insults 24/7 and never fails to show his manners!

Oh my!!!! Thank God you are safe @_mowaten_, I thought you perished in Tikrit protecting your holy shrines.

If you follow the Quran to its logical conclusion, this is truthfully the natural state for the Islamic Empire. The Shia have attempted to replicate the Caliphate system with the Imam/Faqih system which was announced internationally in 1979 with the Islamic Revolution of Iran.

There is a real chance that the Caliphate system may actually resolve many of the issues plaguing Islam today and restore it to the peacful, forward thinking entity it once was during its golden age.

@defact; I can understand and empathize with your response. However, truth be told, the Islamic society of the golden era is a very different from the Islamic societies worldwide we see today. The muslims of today I'm sure would be looked down upon by the religion's founders (and I'm sure the same can be said of Christianity and Judaism). Gone is the era of scientific advancement, open discourse, and the commitment to tolerance and protection of their religious predecessors.

Who knows this may actually turn out to be a good thing?! The system of nation/states drawn up and imposed by the West after the fall of the Ottoman empire has brought nothing but havoc to the region.

there is some sense in your comments, but it's not about the system, it's about the people behind it. ISIL are obscurantist and brutal animals, dont expect anything positive from them

there is some sense in your comments, but it's not about the system, it's about the people behind it. ISIL are obscurantist and brutal animals, dont expect anything positive from them

They may be lunatic but do not underestimate the resonance of this declaration on lot of people who yearn for a day when "we" were powerful. What these lunatics fail to grasp is that the caliphates were multi-cultural, multi-ethnic and multi-religious and were largely tolerent. This is the opposite of what they represent. Also the rightful caliphs were elected (at the time called Mubaya'a). Who did this for Al-Baghdadi?

seems like bashar's ISIL is succeeding better than planned

what a caliph, hiding under a fake name and unable to show his face.

An idiot gimp. Your new Emir will soon show you how to behave.

Your Iranian group is solely responsible for these psycho's coming into Lebanon, so stop with your hypocrisy and double standards. I hope I didn't scare you with all these big words, but it's a fact. AND as you sit back in Dearborn and blabber? more innocent people will die, thanks so much for your brilliant insight!

A caliph that doesn't even show his face on camera, if he exists though...

Yeah, and I declare myself King of England!

I can't believe this, THEY BEAT US TO IT!

The extremist Islamic State of Iraq and the Levant has appointed an “emir”, or leader, over Lebanon and has set up a camp to train would-be suicide bombers and send them to Lebanon, a media report said on Sunday.....AND we have Hezbollah, who are members of the Iranian Revolutionary Guard who basically also act as if they own the country...this is a sad sad time as HA are responsible for bringing these "wonderful" sick individuals to our beloved country. Thanks so much religious extremism! You've proven time and time again how productive for civilized society you are.

wehrmacht, marines, armee de terre, people's liberation army, they're the crepe (whatever that means) with a different flag!

Does this mean that we can stop the search for the next President? Lebanon finally gets a government?

Such a simple person you are, the psychiatric concept of splitting is strong in you. Since summer's beginning, your highschool is off, so I predict these next few months it'll be the same rinse-and-repeat performance from you. Looking forward to the laughs dear.

So this lebpat is living comfortably in the US and supporting Hezbollah, a terrorist organisation, according to her government. FBI time!
If lebpat were living in Lebanon she would have praised Hariri just like Wiam Wahhab: http://www.dailystar.com.lb/News/Lebanon-News/2014/Jun-29/261986-wahhab-praises-longtime-rival-hariri.ashx#axzz3668sb7oT
But living in the US she/he doesn't give a hoot if Lebanon burns.

The Christians believe in the second coming of Jesus. However, this is not the case for Mohammed, who must be rolling in his grave at supersonic speed unable to come out as it was not written that he would! takfir