Kataeb on Aoun's Proposals: Impossible Demands Will Only Exacerbate Crisis 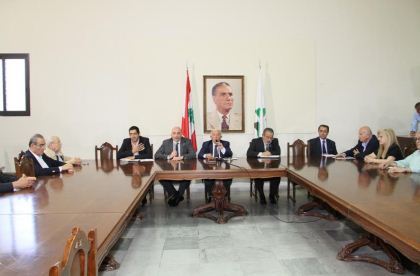 It said after its weekly politburo meeting: “Ending the crisis does not require impossible proposals, which will only exacerbate the situation.”

“Out of our keenness on the rights of all sects and in order to achieve fair power-sharing, why shouldn't Aoun's suggestions be implemented for the election of a prime minister and parliament speaker?” it wondered.

Moreover, the party noted that any solution to the crisis requires calm and that all members of the national dialogue attend the all-party talks.

“This however is not possible as long as a party is engaged in conflicts outside of Lebanon,” remarked Kataeb in reference to Hizbullah's participation in the war in Syria.

Aoun called on Monday for a constitutional amendment that would allow the people to elect their head of state in an attempt to resolve the presidential deadlock.

He said there should be a “limited constitutional amendment,” allowing Lebanese citizens to elect the head of state in two rounds to avoid the same scenarios that parliamentary sessions are witnessing.

Aoun explained that his proposal lies in allowing only Christians to vote for their candidates in the first round.

The system then allows the polls to be held at the level of the entire nation to pave way for both Muslims and Christians to choose the two candidates who received the majority of votes in the first round.

Aoun's Proposal blows the mounasafat right out of the water.

Yes, power card. The ability to have a 50% say on who our president is !

Hey guys
This proposal by lunatic Aoun shows how desperate he is to become President. What would it take to make him understand he will never be President no matter what he tries

Maybe a pat on the head with a hammer...

irrelevant flamethrower is high on coke.

im not sure what is flamethrower and yalee 3a shaklo are from and what sect they are from .. the only thing that their brains actually works on is thier never ending hatred to everything that comes up form anyone in march 14, regardless what it is...you baboon try to use your brains for once and leave your hatred on the side

As a first step, this 5-member party admits we have a crisis. As to how they plan to solve it, well, apparently they are waiting for instructions from their feeder and the one who pumps fart into their soulless balloons, the clueless cheikh Saad al-Harirbi Telteyn al_Marajil.