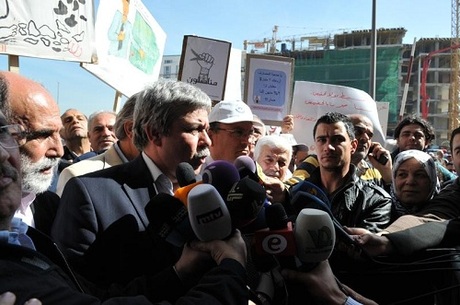 More than a dozen of public sectors employees held a sit-in near the Value Added Tax building in Beirut on Tuesday, reiterating their demand for the approval of the controversial wage hike.

Several Syndicate Coordination Committee activists spoke at the protest, urging the parliament to agree on the salary raise.

Head of Public Secondary School Education Teachers Association Hanna Gharib said that “the issue is no longer about the wage scale. It goes beyond that.”

“It's a scandal. There is a plan to liquidate what remains of social services,” he said.

He also called for unity during an SCC-organized protest scheduled to take place on Thursday.