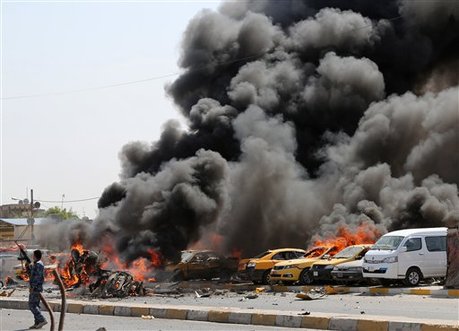 Violence has claimed the lives of 2,417 Iraqis in June, making it the deadliest month so far this year, the United Nations said on Tuesday, underlining the daunting challenge the government faces as it struggles to confront Islamic extremists who have seized large swaths of territory in the north and west.

In recent weeks, fighters from the Islamic State of Iraq and the Levant have spearheaded a lightning offensive across Iraq, plunging it into its deepest crisis since the last U.S. troops left in 2011. The al-Qaida breakaway group now controls territory stretching from northern Syria as far as the outskirts of Baghdad in central Iraq.

The figures issued by the U.N. mission to Iraq put last month's civilian death toll at 1,531, with 886 security forces killed. UNAMI added that 2,287 Iraqis, including 1,763 civilians, were wounded.

The figures exclude deaths in embattled Anbar province, which is largely controlled by Sunni militants.

The second deadliest month this year was May, with 799 Iraqis killed, including 603 civilians. April's death toll was 750.

The latest casualty figures exceed even last year's peak. The U.N. reported that last July at least 1,057 Iraqis were killed and another 2,326 were wounded.

"The staggering number of civilian casualties in one month points to the urgent need for all to ensure that civilians are protected," the U.N. Special Representative in Iraq, Nickolay Mladenov, said in the statement.

Mladenov called on Iraqi political rivals to "work together to foil attempts to destroy the social fabric of Iraqi society."

Through brute force and meticulous planning, the Sunni extremist group — which said it was changing its name to simply the Islamic State, dropping the reference to Iraq and the Levant — has managed to effectively erase the Syria-Iraq border and lay the foundations of its proto-state. Along the way, it has battled Syrian rebels, Kurdish militias and the Syrian and Iraqi militaries.