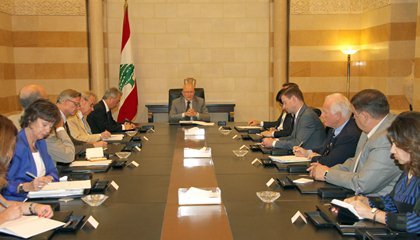 “ISG members ... expressed strong solidarity with Lebanon in the light of the terrorist threat, and congratulated the prime minister on the recent successes of the security forces,” said Plumbly after he attended a meeting chaired by PM Tammam Salam at the Grand Serail.

During the meeting, which was attended by the ambassadors of ISG members, the diplomats “reaffirmed their commitment to promote international assistance to Lebanon,” Plumbly said.

He said the ambassadors also welcomed the “successful meeting” held in Rome last month to explore means to support the Lebanese army.

Plumbly vowed to “actively look for opportunities in the coming period to highlight Lebanon's needs, particularly in respect of assistance and stabilization efforts.”

The ambassadors also welcomed the understanding reached by the cabinet to facilitate its work in the absence of a president.

Plumbly “shared” Salam's “deep concern at the ongoing failure of parliament to elect a president and joined him in stressing the importance of Lebanon's leaders moving to ensure that the election takes place without further delay.”

The eighth round of the polls are scheduled to be held on Wednesday. But the parliamentary session aimed at electing a president is expected to meet the same fate of its predecessors.

The differences between the March 8 and 14 alliances have caused lack of quorum in the sessions, leaving the country without a president after the expiry of Michel Suleiman's six-year term on May 25.

OK you support us. Where is the CASH? All is talk.