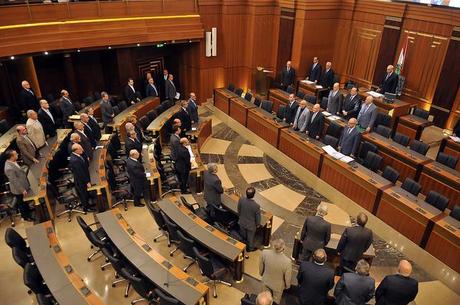 Lawmakers failed in the eighth consecutive round on Wednesday to elect a new head of state, widening the country's political crisis and threatening the upcoming parliamentary elections.

Speaker Nabih Berri set a new session for July 23 after the legislative session on the election of a president was marred by lack of quorum caused by a large number of boycotting MPs.

The rival lawmakers have so far failed to choose a successor for President Michel Suleiman, who left Baabda Palace at the end of his term on May 25, over differences on a compromise candidate.

The March 14 alliance has backed Lebanese Forces chief Samir Geagea. But the March 8 camp has refused to announce its candidate despite its call for a “strong” president.

Free Patriotic Movement leader Michel Aoun, who is a March 8 official, has said he would only announce his candidacy if there was consensus on him.

He further complicated the political process on Monday when he called for a constitutional amendment to allow direct elections in two rounds.

MP Alain Aoun, from the FPM chief's Change and Reform bloc, said during a press conference at parliament that the proposal gives justice to all confessions.

“The factions have only two options – either to implement the Taef Accord fully or to amend it - or else we will continue to have crises,” he warned.

The proposal would resolve the problem of balance of power in state institutions and the representation of Christians, the lawmaker said.

But Aoun's initiative has been widely rejected by March 14 officials and the centrist Progressive Socialist Party of MP Walid Jumblat.

LF MP Elie Kairouz snapped back at Alain Aoun, saying the proposal leads to a “fundamental change in the (political) system.”

He accused the March 8 alliance of paralyzing parliament, rather than attending the sessions to elect a president.

The wife of the LF chief, MP Sethrida Geagea, also wondered whether Aoun made his proposal because he wasn't able to get elected.

Health Minister Wael Abou Faour, who is a PSP official, told MTV that the details and the timing of the initiative were not appropriate.

The continued failure to choose a president led to repeated warnings by Berri, who was quoted as saying on Wednesday that the parliamentary elections are approaching and the situation looks totally blocked.

The parliament's four-year mandate has been extended for 17 months till November 2014 after the MPs failed to agree on a new electoral draft-law.

it's a farm anyways not a country so why do we a need a president or a parliament or ministers or anything? No water, no electricity, no proper internet, no proper cable TV, no proper road safety, outdated laws, no jobs, laughable wages, militias, refugee crisis, terrorist training camps...i can go on forever.

but we have resistance!

What you have here is a gross failure to communicate. Aoun knows that you cannot propose such a thing without a whole lot of prior consultation with all sides so that there is buy in from everyone. Coming up with this idea, unilaterally is akin to launching a grenade into the marketplace. No one is going to cheer that a grenade has landed at their feet.
He is either completely out of touch with reality by the method he has chosen, or it is a deliberate act of sabotage and delay carried out at the behest of his paymasters in Iran.

I saw Aoun on MTV last night sitting at his little desk with his computer screen and his loyal party members sitting in chairs all in a row, silent and staring forward as the Great Leader pontificated. This is the problem. It is not just Aoun, who suffers dementia and delusions of grandeur, but it is also the people around him who have the ability to take him by the hand and lead him away. They breach their duty to the nation by sitting silent, eyes forward and not abandoning a person whose mind abandoned him long ago.

Take into account FT's feelings, after all he and his fellow Mukhabarat and Jamil Sayyed/Adnan Addoum thugs did to close MTV down here it is raised from the ashes like a phoenix more powerful and popular than ever and poking the poor stooge in the eyes like he's Curly.

The failure to elect a successor to Michel Suleiman is not a result of "differences on a compromise candidate"!!! It is simply the result of M8 failure to nominate a candidate and their failure to appear at Parliament to vote.

Please stop using the asinine rhetoric of M8. Democracy means participating in a vote, not making a back room deal.

You cannot blame the bloc who has nominated a candidate and appeared at all Parliamentary sessions to vote (M14). M14 believes in the democratic process, while M8 has put forth no candidate, nor appeared at Parliament for the vote. By phrasing the failure to vote for President as a result of "differences on a compromise candidate" you are endorsing the a false narrative.

Aoun calls himself the strongest candidate, and his actions show his intent that it is "Aoun or no-one". That is not democracy. If M8 wants a "compromise candidate", let them nominate him, and appear for the vote.

LOL @ Lebanese people taking this mafia war we call 'politics' and sub-humans we call 'politicians' seriously. The delusions of the Lebanese aren't even funny or sad anymore, they're just absurd. Hope you're enjoying condemning the youth and destroying the future of Lebanon so that your zu3ama can continue to steal from their own people. And of course, it's all America's fault, it's all Iran's fault, it's all Saudi's fault, but never the fault of the angelic, honest, blessed Lebanese.
~A Lebanese youth