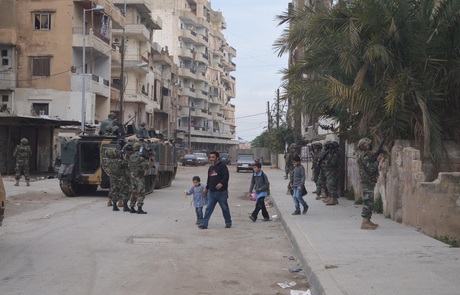 A hoax bomb was discovered on Wednesday evening under al-Khnaq Bridge in the northern city of Tripoli.

State-run National News Agency said the device consisted of an unarmed hand grenade and a timer that was connected to it.

“Security forces immediately arrived on the scene and removed it,” the agency added.

Earlier, LBCI TV said “two hand grenades connected to a battery and a timer were found under al-Khnaq Bridge.”

Separately, a non-political scuffle broke out among a number of young men in the vicinity of the army's barracks in Tripoli's al-Qobbeh, which prompted the intervention of security forces, NNA said.

“The young men were arrested and a number of their relatives rallied outside the Internal Security Forces barracks to protest their detention,” the agency added.

The incidents come after four people were injured in a grenade attack on a cafe in Tripoli's Bab al-Tabbaneh area.

The motive for the attack was not immediately clear, but there were suspicions the cafe was targeted for opening its doors during the Muslim fasting month of Ramadan.