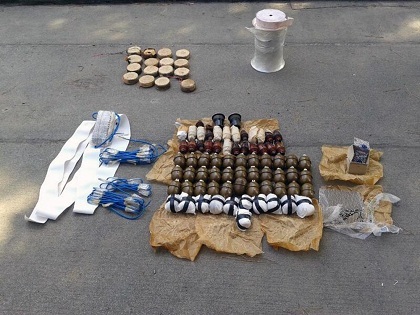 The army carried out more raids in the northern Akkar region of Fnaideq following similar operations it carried out last week, it announced in a statement on Thursday.

The Army Command said that the military discovered explosives belts and explosives in an agricultural field in the region.

The raid was based on the confessions of detainee Mahmoud Khaled.

The National News Agency said that the military carried out the three-hour raid in the area between al-Qamouaa and Fnaideq where it dug in the ground in search of the explosives cache based on confessions of detainees who were arrested last week.

Earlier on Thursday, al-Jadeed television said that the army discovered in Fnaideq an explosive belt and hand grenades in the residence of detainee Mahmoud Zahraman.

The army announced on Saturday that detainees apprehended during recent raids in Fnaideq confessed to the existence of a cave in the region where they used to prepare explosives.

The army said that it carried out a raid of the cave where it discovered bombs that were prepared to be detonated.

The confessions were made by Alaa Kanaan and Mahmoud Khaled, members of a terrorist network who were recently arrested.

keep up the good work, You are our only Hope

for all our fellow tourists out there all these news are blablabla we are partying all night long come n see by yourselves lebanon the best country ever...this campaign is all planned n payed for to ruin the lebanese summer!!

spot on zeinghahbal! just a little nuance though...
rockets serve as defense against israel, grenades (+EXPLOSIVE BELTS you seem to have missed that one) serve to commit terrorist attacks against lebanese civilians and soldiers.

Party by yourself. Partying is not the answer to good living. Party until you drop dead :)

they could also be used against civilians in qusayr and qalamoun.

No why? Flame??
Hezbos only protect 5 wanted by (zionist) stl for the murder of hariri and co, one (now martyr during his jihadist duty) wanted by lebanese judiciary for butross harb assassination attempt (he was only fixing the elevator), smaha case (court on hold bc liban post could not find mamlouk to give hom the letter well maybe next time general ibrahim can give it to him), hachem salman killed in daylight in front of our armed forces and pics available on the net (but no investigation even openened bc lack of evidence, and sayed nassralah said it was ok bc it was "3afawiyeh" so... Ok), tripoli bombings and ali eid and friends...even when hezbos got caught for killing an laf officer on a hellicopter they just have to say sorry and 6 months jail is enough (bc they thought it was a bird..) hezbos can go on jihadist duty in other countries, they can go help assad a man loved by his population and by all lebanon for the joy he brought us, this added to some playtimes like 7 may..

hello popeye:) I have a question for @Jaafar: what's your take on Kendra Wilkinson's husband ,Hank Baskett's shocking tryst with transgender model Ava Sabrina London? Is that something you expected? Please, explain

you are sooo stupid...

a fraction of what michel samaha brought with him from assad

your answer confirms what i said : you are just an idiot....