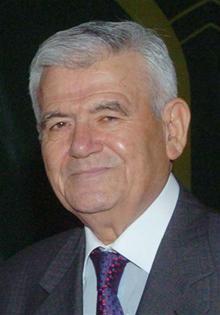 The ongoing division between the two Higher Islamic Council escalated after the body led by deputy Grand Mufti Omar Misqawi filed a lawsuit against the members of the council headed by Grand Mufti Sheikh Mohammed Rashid Qabbani.

According to As Safir newspaper published on Friday, the three-year war between the two councils reached a new level after Misqawi filed a lawsuit against the members who have an “illegal status.”

Misqawi accused them of “exaggerating and insisting on violating judicial decisions... And impersonation, which breaks the law.”

The daily said that the lawsuit is comprised of 32 pages along with 26 documents.

The members are expected to be questioned next week, the report said.

Mohammed Murad, a member of Misqawi's HIC, told As Safir that the “lawsuit is to pressure the impersonating members to assume their responsibilities.”

The newspaper said that the lawsuit also includes the head of Dar al-Fatwa's Islamic Endowments, Sheikh Hisham Khalifeh, who is loyal to Qabbani.

Misqawi's council accuses Khalifeh of sectarian incitement, the endorsement of stances that violate the Shura Council decisions deeming them as “unbinding” and of making a void call for the election of a new Grand Mufti in August.

In June, Sheikh Khalifeh called for electing a new Grand Mufti in August, but this announcement was met with the opposition of the council led by Misqawi, who demanded the elections to be held as soon as possible.

The daily said that the council led by Qabbani had also filed a similar lawsuit against the council of Misqawi in April, challenging its legality.

The dispute between the council led by Qabbani and that of his deputy Misqawi is the result of political interference.

Vacuum in Baabda are we heading to another vacuum at dar el fatwa??