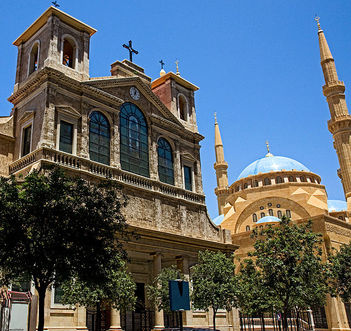 Interior Minister Nouhad al-Mashnouq has vowed to protect the country's places of worship after an alleged threat by extremists to attack churches.

Al-Mashnouq rejected such threats, saying “we are keen on protecting every inch of the nation's land.”

“We will defend our churches and mosques with all the power we have,” he said in remarks to al-Mustaqbal daily published on Friday.

He also vowed to “cut the hands” off wrongdoers.

Al-Mashnouq revealed that he asked the government to approve an increase in the number of Internal Security Forces members from its current force of 30,000 to 40,000.

The approval could help the ISF protect citizens all over Lebanon in coordination with the Lebanese army and the rest of the security agencies, he said.

The so-called Free Sunni Brigades in Baalbek said on its Twitter feed late Wednesday that militants would attack churches in Lebanon.

It said the jihadists were tasked with “cleansing the Islamic state of Bekaa in particular and Lebanon in general from the churches.”

Several officials have dismissed the threat as fake. But al-Mashnouq did not clarify whether the extremist group exists in real or it is just a group with a Twitter account.

An Nahar daily said that the ISF cyber crime bureau has launched an investigation to identify the suspects who are operating the account and those backing them.

deprive all terrorists or at the very least those universally agreed upon from all kind of social media; by not doing so the existing free media exposure willingly or unwillingly is helping to reinforce the terrorists sick ideologies and ultimately bring about the demise of the free media itself.

Let us try to understand the terrorists mindset. Hezbollah in 1980s attacked the marines and French paratroopers thinking they will leave Lebanon, Assad for years and years used the terrorists such as Sa3eka to break up, and eliminate the Christians,Druze, and Sunni. Israel for years with iron fist is fixing the Palestinians that throw rocks at the well armed IDF. All examples failed to achieved their goals by force as for every action there is an equal and opposite reaction.
Negotiation and compromise is the way out otherwise we will never see peace.

Good job overall by Mashnouq in fact sometimes outstanding. But, don't use such big words because not even the strongest of nations has been able to stop such attacks. There are many reports in todays newspapers saying these Brigades are fake with fake twitter accounts. Inshallah true..

Any FSA-Al Qaeda jihadist terrorists who is plotting terrorism against Lebanon needs to be tortured and hanged.

Yet another scare tactic to put the final nail into this summer season's coffin...

Every Lebanese should pray to God to protect, thank, and bless every Hizbollah resistance fighter for destroying a a large swathe of terrorists in Syria and prevented them from taking over Lebanon. Otherwise, lebanon would have been "cleansed" by now of all Christians, Shias, Druze, and other non-Sunnis.

I'm not sure if the comments about HA protecting us are sarcastic are not. I don't necessarily buy that they are doing it for the greater good of all sects, but I don't feel that HA would threaten to or attack a church. They have extremists in their ranks no doubt, who doesn't? They may be power hungry. But the Sunni extremists would attack a church in a heart beat. We all know this, we just don't like admitting it on here.

mashnouq the traitor doing public relations, coz he let Eids flee to Syria. What did Mashnouq do against the mosque bombers in tripoli ?