4 Killed in Traffic Accidents in the North 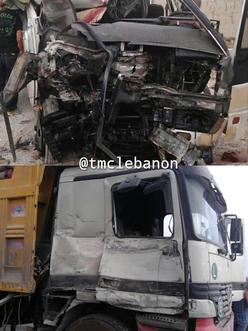 At least three people were killed early on Friday when a bus and a truck collided in the northern region of Akkar.

The horrific accident also wounded 28 others.

The bus' front appears to have hit the side of a truck carrying cement on the main road of Menjez in Akkar.

Lebanese Red Cross Operations Director George Kettaneh said that some of the wounded who were admitted to hospitals in nearby areas already left as they didn't sustain any severe injuries.

The driver of the bus was among those who were killed.

The National News Agency reported that security forces arrived at the scene and opened an investigation into the incident.

Also Friday, an individual was killed when his vehicle plunged off a cliff on the Kfarhazir main road, the Traffic Management Center said.

you really are a total retard.