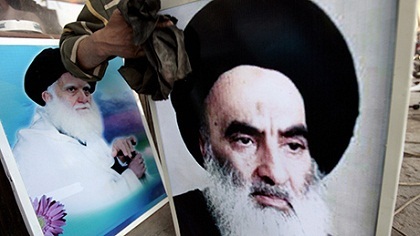 Iraq's most senior Shiite cleric said Friday the failure of the new parliament to elect a speaker at its first session this week was a "regrettable failure," heaping pressure on Premier Nuri al-Maliki.

Grand Ayatollah Ali al-Sistani, along with the international community, has called on Iraq's bickering politicians to unify in the face of a Sunni militant onslaught that began last month, but Tuesday's parliamentary session ended in farce.

Several Sunni and Kurdish lawmakers walked out of the chaotic session, which was marred by threats and acrimony.

Ahmed al-Safi, a spokesman for Sistani, said in a Friday sermon in the Shiite shrine city of Karbala that "citizens were optimistic that this would be a good start for this parliament."

"But the failure to elect a head of parliament and their deputies before it adjourned was a regrettable failure."

Sistani, an octogenarian who lives in the nearby holy city of Najaf, is revered within Iraq's Shiite majority and his stature dwarfs that of any single politician.

His spokesman also called for the rapid formation of a new government, a problem made more difficult by deteriorating support among lawmakers for incumbent Maliki and questions over who might replace him.

Seen as a sectarian and divisive figure by many, Maliki points to his huge popular mandate after his State of Law coalition dominated April's parliamentary elections.

"The speeding up of forming a government within the constitutional framework with wide national consensus is of the utmost importance," Safi said.

The remarks come after jihadist-led militants seized swathes of territory across five provinces in a swift offensive that began June 9, displacing hundreds of thousands of people and alarming world leaders.

the only heretics are those who call for slaughter and destroy in the name of god and intolerance and make the entire world despise and hate muslims. yes, i'm looking at you da3eshbustani